Before I start--a disclaimer: this is to give an impression, not to gloat or be condescending. It is for educational purposes only.

This is so funny how it all coincided with the whole vector of my series of posts about military education. Almost surreal.  I am on record that Bologna Process, all these Bachelor's and Master's Degrees are useless inventions in the world where something else is needed entirely for a serious and deep education. Now get this, today:

Translation: The President of Russia Vladimir Putin express doubts about separation of education for Bachelor and Master degrees. "Is this some kind of fad, does it make any sense?" Moreover, The Minister of Education Olga Vasilieva declared that Bachelor is not enough for humanities education. She (Vasilieva) thinks that Bachelor's Degree is merely incomplete higher education.

Finally! This stupid and baneful European gradation of "degrees" came to post-Soviet Russia on the heels of devastating "reforms" of by a bunch of creeps in power in 1990s. It had a disastrous influence on Russia's always very impressive higher education. Yet, leading Russia's universities, such as the cradle of Russia's (and world's) space program, nuclear power and weapons, Bauman Moscow State Technical University (MGTU), among many others, still maintains the program of Specialitet (Specialist). Take a look:
Now, let us define what Specilaist is:

Translation: Specialist, is a traditional for Russia (and USSR, I may add) level of higher education implying 5 year long study. The graduate is granted degree of Specialist and receives diploma (degree) of Higher Professional Education. In 2011 due to the transfer to the educational standards of the III  generation and Russia joining Bologna declaration and transferring to two-tier system of education: Bachelor's (1st level of higher professional education) and Master's (2nd  level of higher professional education). Within the framework of Specialist type education, specialties and specializations do exist, within Bachelor's--only general directions and profiles.

Confusing? Hell, yes. Now let me explain what five-year long higher education was in USSR. In reality it was 6 academic years long due to Soviet military academies studying full day on every Saturday, with the exception of holidays. Calculate the number  of the work weeks for each of the five years? Right--additional year of education. Here comes another thing in modern Russia, people with B.S. (Bachelor's) in engineering, as an example, are viewed in very many places as nedouchki (not fully educated people). I happen to agree with such harsh assessment. In STEM, to become a good level professional roughly 50 weeks x 4 years= 200 weeks, and 50 x 6 years= 300 weeks (all very roughly) in case of specialist or, for that matter, Master, compare very unfavorably. I am, of course, not talking about humanities. A remarkable comment to the news of Putin and Vasilieva effectively putting this stupid two tier system down as, pardon my French, complete crap and hinting on return to good ol' superb Soviet professional Specialist education reads like this:

Translation:  It took somebody 25 years to finally figure this out...

Here comes second important notion--Russian and Western STEM higher educations are simply NOT-compatible on a fundamental level because even today, after disastrous "reforms" of 1990s, kids in Russia (I am not even talking about USSR) who aspire for STEM higher education receive in public school the volume of instruction in math, physics, chemistry or geography to name a few subjects, which is beyond the grasp of most Western schools, including elite private ones. This was even more true in Soviet times where average Soviet school graduate received three times more instruction in math, physics, chemistry and biology than it was stipulated for the entrance to MIT. Not to mention the fact that institutions of such level as Bauman's MGTU, Moscow State University, Novosibirsk SU etc. still retain own ENTRANCE exams beyond the required scores at standardized school exams known as EGE. Here is a typical problem in Physics (1 level of priority) at the entrance exams, that is upon graduation from public school, to MGTU.

Translation: the bubble of gas  with the diameter d has occurred at the bottom of the pond. During ascent to the surface its diameter increased n-times. Find the depth of this pond in this place. Atmospheric pressure Po, coefficient of surface tension (lower case sigma) and water's density p (rho) to be considered known. During the expansion gas temperature remains constant.

Here is the solution: 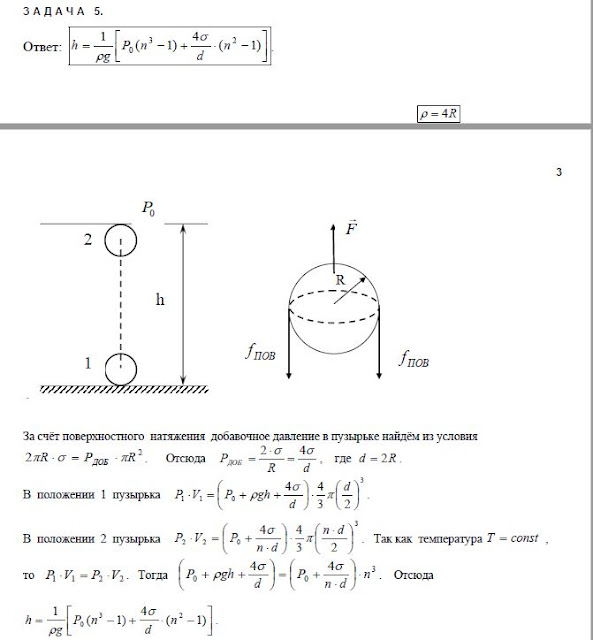 A typical problem for a school graduate. Requirements for entrance to MIT you can see here. While tests for Physics you may see here--as expected from College Board.  In fact, you are not even required to take Physics exam, you can take Biology instead. Wanna know what Math 1 stands for? Browse MIT site. Hell, while at it go to Math 2 also, and why not. The point? The point is that students who have to solve trigonometric equations like this by the 10th grade:

an extremely easy equation based on basic identities and quadratic substitutions, will have very little difficulty after going though hell of physics-math-language entrance exams getting to serious calculus and differential equations, not to mention mechanics and, eventually, weapons' and industrial design.  And that is the only thing that matters--HOW hard it is for future elite to go through this academic survival course. In my case add here nightmarish conditions of a brutal military regimen, especially the boot (and especially in Baku in Summer) and combination of simply unrelenting pressure of academics combined with an incessant sleep deprivation, hunger and necessity to carry out military duties ranging from duties in company quarters to actual guard duties of naval academy arsenal and classified facilities. If you survived the first year (many didn't), our company shrank in 1980 from 4 platoons and roughly 125 cadets to 3 platoons of about 90 cadets. The same trend was in other new companies--washouts numbered in many dozens. Symptomatically the first year of academy is called Guilty Without Guilt (Bez Viny Vinovatye) after Alexander Ostrovsky's famous play. As the senior (starshina) of our company in 1980, then himself a cadet of the 4th year (a normal practice of appointment of senior cadets to command 1st-2nd year companies, assistant to officers in charge. used to say--you will be like that until you stop shitting with home made pies, then, maybe something will come out of you....Damn he was right. It begins to dawn on you once you enter the world of serious military technology and weapons, and people who use them--that is a cultural shock.