Colonel Lang in his today's post gives some review (a good one) of his analytic tools which, to a large degree, are mine too. I quote him:


Epistemology:
1-Duck Rule: If it walks like a duck, squawks like a duck and has feathers, it probably is a duck.
2–Sherlock’s Rule: When considering a problem, remove everything from consideration which seems untrue. What is left is probably the truth.
3-Occam’s Razor: In considering a complex phenomenon with many factors and a variety of explanations, remember that the simplest explanation that accounts for the factors is probably correct.
4- The KISS principal” “Keep it Simple, Stupid.” (Army Rule)

But the impression is amplified greatly by this hilarious photo. I already congratulated Colonel with his complete mastery of the art of meme. As you may have expected--the issue here is still the ridiculous claim of the "swamp" of Russians interfering in US Presidential elections. 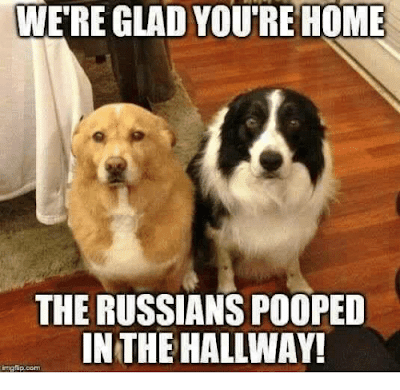