For those who are interested in what makes RAND "click" nowadays in terms of its delusions and doctrinal and operational gibberish they "research", one may try the latest from Mr. Ochmanek and Co. in terms of what they present as:

U.S. Military Capabilities and Forces for a Dangerous World,  Rethinking the U.S. Approach to Force Planning

You can easily download PDF with their tedious report and if you have the time you may indulge yourself in about 153+ pages of an operational and strategic delusion which RAND's big brains present as a scientific research. I will not elaborate here on some overtly preposterous claims and false assumptions such as this one, among many:

To defeat ISIS, the United States has supported two major elements of the anti-Assad rebellion in Syria.

LOL, yes, by supporting and training these very same ISIS and Al-Qaeda. Or this strategic pearl unique in its hilarity:

During spring 2016, the Russian aerial campaign had some success in helping the Syrian armed forces to defeat a variety of rebel groups in and around Aleppo, Syria’s second-largest city. The Russian aerial intervention has complicated U.S. and allied use of air power and SOF units to inflict damage on ISIS.


Not to mention, of course, this, expected by now, statement:

More to the point, for the United States, having the finest force in the world does not, in and of itself, guarantee that those forces will be able to meet all of the demands being placed on them. Since the United States’ entry into World War II, this nation has espoused and largely practiced a uniquely ambitious national security strategy.

Obviously, causalities of WW II, as well as proportions and scales of it are not known to authors but how the "finest force" managed not to win since 1945 any conflict with any more or less determined (forget peer) adversary remains a complete mystery shrouded in the fog of RANDeanese or Pentagonese lingo and in the obfuscation of the most crucial operational, strategic, cultural and social factors of wars the United States fought since WW II. Well, WW II history in the US is altogether  a peculiar subject. But never mind, folks. Obviously, the authors of this "research" come up with pretty generic conclusions. You know, something like that:

Addressing the challenges posed by the most-capable adversaries generally calls not for a larger U.S. force but rather for a force equipped with appropriate modern weapons and support assets that is also postured for responsive and resilient operations in theaters of potential conflict.

Yes, gimme, gimme, gimme, more, more, more of the same. That means more pork in producing weapon systems which do not work. And here comes this thing in this report--Russia, being named a main adversary of the United States (China, obviously, is second--but that is not really a contingency. Why, is a separate matter)--what kind of war with Russia. Forget now highly anti-scientific and anti-military propaganda BS of a "hybrid war" simulacra--by now the use of it is a first sign of military incompetence of people who express their opinions on the warfare. Authors, after repeating all tired and false cliches about US military, review the force required to fight a so called major war with Russia. They even tabulate it. Here is this table: 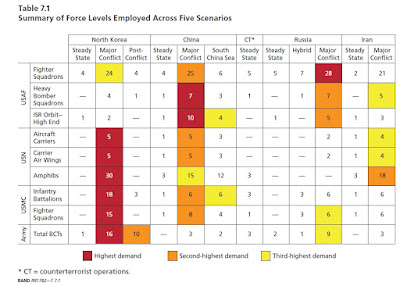 Granted Mr. Ochmanek's background in Air Power, one is literally forced, however, to ask him where did this number of 28 fighter squadrons and 7 bomber squadrons required to fight those pesky Russian Forces which are about to overtake free and democratic Europe come from? It is a number which can be expanded to a number of single aircraft using maximum parameter of 24 aircraft per squadron, that is 28 x 24 = 672 fighter aircraft and 7 x 12 = 84 bomber aircraft, plus all kinds of other transport and AWACS etc. So, altogether we are talking about 756 combat aircraft by 2020 "major conflict" with Russia. That is, of course, if Russia would want for some unknown reason "invade" those magnificent Baltic States. Obviously, to sound scientific Ochmanek and his group employ all kinds of platitudes and pre-conditions  such as:

We exhort the reader not to place too much store in the numbers in the table. They are based on the authors’ estimates using internal analyses and unclassified sources. The numbers that DoD would use are undoubtedly somewhat different. Our purpose in presenting them is not to attempt to provide definitive estimates of need, but rather to show a concrete example of how our recommended approach could be applied and to provide a basis for first-order comparisons of the size and cost of the resulting forces.

Well, this is all fine and dandy and I, actually, agree with authors here on this particular issue--it is advisable to give at least SOME numbers which illustrate methods; but immediately here comes the question--WHAT methods are behind those estimates? This, if one discards this fluffy rhetoric about "finest force" and all this "stealth", "platforms" and other BS lingo. One must ask next questions and answer them:

Q. When was the last time the USAF fought in highly dense EW environment with AD systems whose capabilities already today cover ALL challenges which are presented by the latest in US technology?

A. Never. In fact, the USAF may not even internalize yet that it will (not may) fight blind with its C3 either seriously challenged or completely disrupted.

Q. When was the last time the USAF fought world-class adversary AF which can approach or match USAF on the theater both in quality of its pilots and aircraft, and in quantity?

A. Never, since Korea.

Q. When was the last time the USAF deployed to the front-line, or even rear, airbases which were subjected to major attacks by adversary's both AF and salvos of cruise and tactical operational high precision stand-off weapons, which led to a severe disruption of air operations, massive casualties of personnel and significant loss of aircraft?

A. Never. After observing a rather unimpressive performance (OK, failure) of the Patriot anti-missile systems against obsolete 1970s Yemeni Scud knock-offs recently, one is forced to ask what will this AD do against state-of-the-art, stealthy, AI-driven and EW resistant missiles' salvo, say of 40 or 60 missiles? How about several such salvos?

Q. Does Mr. Ochmanek understand that the myth of Stealth has been completely dispelled and modern AD complexes and advanced radar systems of modern aircraft such as SU-30SM, SU-35C or MiG-31BM see, track and can shoot down any "Stealth" target?

A. Maybe, but his Politburo tells him to produce this pseudo-scientific trash otherwise he will lose his sinecure.

Q. Does this RAND group calculate own attrition (or FERs, Fractional Exchange Rates) in such conflict correctly?

A. No. Anyone who thinks that the force of 762 good but fairly conventional (or really bad) combat aircraft can go against Russian Air-Space Forces in Russia's vicinity and win is either delusional or incompetent. USAF will not be able to suppress Russia's AD system to start with, the opposite most likely will be true.

I am not even going to ground forces here--any military realist can see what is coming by 2020. So, the more one begins to ask this kind of questions, the more one begins to see a complete lunacy of this kind of "planning", "research" and "advice", which, in case of RAND, is delivered to US policy-makers as a distilled wisdom.  It is obvious that this "wisdom", as I already stated, is more about money--funding for Military-Industrial Complex. As DIA's Russian Military Power reports:

Russia also has a deep and abiding distrust of U.S. efforts to promote democracy around the world and what it perceives as a U.S. campaign to impose a single set of global values.

Here is the issue, Russia doesn't "perceive" anything about the US anymore. US' "stellar" record of unleashing conflicts all over the world, supporting terrorist groups and all kinds of illegal overthrows of governments is out there for everyone to see. So, if that is called "promotion of democracy" then I kinda get it why huge number of people around the globe try to arm themselves. But the 800 pound gorilla in those calculations is still in the room and it is inescapable not to notice it: when was the last time the US won anything militarily? I can only state obvious--bar some turkey shoot in Gulf in 1991--nothing. One of the reasons for failing time after time to win a classic military conflict, that is "compel the enemy to do our will" is, as I continue to state non-stop for years now, a complete delusion of American military planners who long ago bought their own carefully-crafted mythology about superiority of own weapons, which are not superior, or about superiority of an American soldier (American soldier is a good soldier but not "superior"--it depends), or of American "planning" which fails time after time the test of military reality, in which "superior" and false numerical coefficients are being plugged into the combat models to produce politically correct outcomes. As this RAND "research" testifies to--the lessons haven't been learned and they cannot be learned--they are difficult to learn until one sees what real war does to his own family, property, country, in the end--to himself. Those things are unknown and beyond the grasp of the "best of the best" US military planners, since none of them ever fought defending their home. Russians did it for millennium. No amount of falsification, stolen valor or propaganda can hide this simple military fact. Certainly not this RAND's pseudo-scientific report.