Poland's Defense Minister Antoni Macierewicz is slowly but surely hitting the bottom. In his latest statement he went for jugular, he accused USSR in... Holocaust.

USSR is Responsible for Holocaust (in Polish)


I witnessed many things in my life which left me either speechless or scratching my head, but this guy he is not just certifiably insane, he also sings from the old script written not in Poland. In the end, this diagram may explain why: 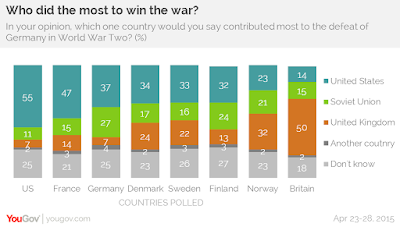 Truth be damned (and it largely has been already in the combined "West") but in view of many the history of WWII MUST be rewritten and this desire does not originate in Poland, it is just that current Polish "elites" are true believers and as such are a very good instrument, for now. "Those who control the past control the future", Orwell got that right. Attempts to rewrite the history of WWII will continue, financed both from the US, for obvious reasons, and through other NGOs. In Poland this problem is exacerbated by the sense of closing window for cheap credit, investments and, in general, EU welfare against some pretty grim economic and geopolitical trends unfolding in a front of the West. So, Poland, apart from demanding reparations from Germany (good luck with that), now decided to up the ante with Russia. Obviously, Russians, who liberated concentration camps during WWII may have a very different opinion of who really perpetuated or helped perpetuate the Holocaust. After all, unlike Macierewicz' statement that Polish Army handled Wehrmacht just fine, that is until USSR "stabbed Poland in the back", so far Poland performed great only in one type of warfare--demolishing monuments and now, finally, Soviet military cemeteries. I wonder why attacks on monuments on Confederacy were so fanatical? As one neocon noted recently:

The idea is not to erase history, but to contextualize it.

I have some news for this Ph.D--it is about rewriting the history and always was. Hopefully, by 2019 Russians will have fewer and fewer relations with Poland and it is probably for the better--the voice for returning the remains of hundreds of thousands Soviet soldiers who lost their lives liberating Poland in WWII are becoming louder and louder in Russia. After all, the time when it will be an American GI, not Soviet Ivan, who liberated Auschwitz are not that far away. As diagram above shows just another small push and Winston Smith's idea that "2+2=4, everything follows from here" will be, finally, gone.