Why Poland Is In The Dead End Already.

I already made several references to Poland in my blog and, of course, who would miss out on such characters as Poland's Defense Minister Antoni Macierewicz, who is now suspected in Poland to be... Putin's agent. Reminds something? In some sense Poland is coming through what the United States is doing now--a complete breakdown of mental health, be it in a form of considering demanding of reparations from Germany for WW II or being driven completely mad by traditional Polish Russophobia. Nothing really new here about Poland who, certainly, in terms of insane rhetoric punches way above her weight, while in reality remaining a middle-of-the-road European nation which due to her dramatic de-industrialization has very little to offer to the master other than rabid hatred towards everything Russian and... German.

I would have let it slide, in the end, Poland is of any interest to anyone in Europe only as a main supplier of plumbers and as a main geographic and political obstacle (or mole for the US, depends on POV) for Russo-German energy link by means of Nord Stream 2. But what I saw today stunned me. 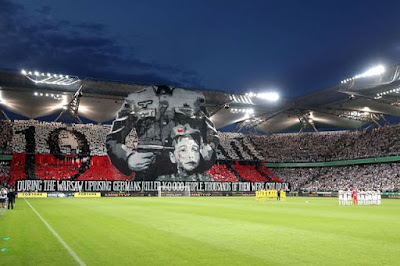 This is the photo from August 1 match of FC Legia Warsaw against Kazakhstan's FC Astana in a qualifier for UEFA's Champions League. Yes, my friends, this is how Poles (at least on Legia's stadium) see it appropriate to commemorate the start of Warsaw Uprising in which 160 000 Poles died, including many children.

You see, guys, Poland always have to remind everyone that she is exceptional and she is especially exceptional towards Germany (and Russia, of course). Never mind that today's Germany has absolutely nothing in common with the Third Reich and, actually, relinquished a rather juicy parts of its territory in 1945 to Polish state. But the main question here is propriety. I remember imbecile Korean fans during 2002 World Cup rooting against German national team by emulating Nazis. FFS, people, give it a rest--modern Germany is a completely emasculated nation (other than former Eastern Part, where actual Germanness was largely preserved) which, while powerful economically, only begins to remotely recall that she has her actual legitimate economic interests. One of those interests is, of course, affordable gas from Russia. This interest is in a direct contradiction with US interests in Europe. Poland helps US to promote US interests in Europe by sabotaging energy projects. If it takes to do it in such tasteless, in fact into your face disgusting manner, in a place which supposed to be a celebration of a beautiful game--nothing is too low for Poland.

I wonder if Israeli clubs should put out the Holocaust banners during their games, or, why not FC Zenit St.Petersburg fans exhibit horrifying images of Leningrad's Siege--seems only natural, doesn't it? What can possibly reflect the spirit of UEFA--the organization which embodies European spirit of unity and love for the game--than pictures of, say, FC Dynamo Dresden fans unrolling the banner of the bombed into fiery rabble in February 1945 Dresden, with burned bodies? It is a very notable date in WW II history, so why not? But they will not do that for a simple human reason of it being totally inappropriate and being out of place--otherwise, Russian football clubs' fans could have been parading the banners with images of innumerable atrocities Axis committed in USSR. Russians sure as hell have a lot of memories of that. But never mind, Russians never forgot but long ago forgave Germany, especially Germany whose main danger today comes from the spread of the cultural "values" which can only be termed, for the lack of better word, suicidal. There is no need to go around reminding German people about their guilt--none of those who perpetuated atrocities are alive today. But current geopolitical situation dictates new measures and Poland is only too happy to oblige. Damn the propriety and any remnants of human decency.