And I mean the way they were and are known, not some Typhoon (after the missile complex) moniker. Project 941 Strategic Missile Submarines, Akula. I post here some photos which convey better than anything I ever saw the mammoth size of those beasts. First is pretty much generic view of those subs near pier. 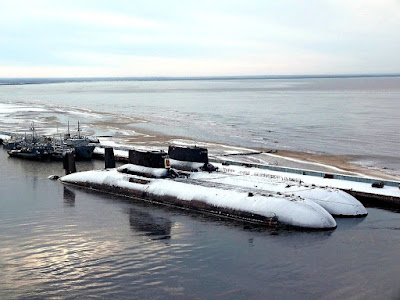 Now to how people look in comparison:

The question is, even considering the fact that those are very expensive ships to maintain, and plans exist to scrap two out of remaining three, what is going to happen, if somebody among the powers that be decides that it is too early to scrap those beasts? Yes, I am aware that they are not as silent as their younger heirs but Dmitry Donskoi, which underwent a refit as a Bulava SLBM test platform, is still around and doing well. And there were calls from some quarters (in Russian) to retain remaining boats Archangelsk and Severstal' for, and you may have guessed it already, not SLBMs but as Kalibr (and possibly Zircon) carriers. After modernization, of course. You know what is approximate number of cruise (land-attack, anti-shipping and anti-submarine) missiles such a boat can carry? In accordance to Alexandr Mozgovoy, one of the most competent observers of Russian Navy, the number is 396, yes, you are not mistaken three hundred ninety six cruise missiles. This is a devastating fire power and, yes, let's face it, a submerged and very Russified version of a US Navy's good ol' idea of Arsenal Ships.

Of course, one may (justifiably, I may say) raise the issue of first four Ohio-class SSBNs converted to SSGNs but the similarity between the two will be very superficial. To start with, the idea of Arsenal ship hasn't been born in a vacuum, Soviet Navy's Project 1144 (Kirov-class) nuclear battle cruiser can easily claim the fatherhood of arsenal ships concept since were conceived as...well, arsenal ships, albeit for a Sea Denial mission. But much more is important, when comparing 154 Tomahawks, carried by Ohio-class SSGNs and any Russian Navy's concept or actual sub is the fact that all modern Russian subs carry or will carry large quantities of extremely capable anti-shipping missiles--this is full blown Sea Denial mission, which in layman's lingo means sinking enemy's ships and subs. If sinking is done by current 660 kilometer (350 nautical miles) range P-800 or 3M54 or whatever comes soon in the shape of 3M22, Sea Denial and A2/AD implications become more than just operational or strategic, they become political. Potentially, even a single Akula in Cruise Missile configuration (allegedly Project 941 KU) becomes, after proper modernization, a massive factor without even leaving relatively comfortable confines of the Russia's fleet and ASW patrol aviation zones.

Are these fantasies or a viable operational (and technological) concepts? Difficult to say, but Russia employed unorthodox technologies not for once, be it on land, in the air or in the sea. Will such a hypothetical modernization of remaining Akulas be expensive? Hell, yes. But so is modernization of Peter The Great, not to mention Admiral Nakhimov. I think those underwater mastodons didn't say their last word yet and considering financial restraints for building a whole new fleet of yet another SSGNs, apart from actively building Yasen-class (Project 885) SSGNs, using of the good ole' Red Oct....forgive me, Akulas doesn't seem to be such a far fetched idea after all. In the end, a decision (a correct one) to modernize a fleet of Project 1155 Large ASW ships is being implemented. You all know a very old principle--If Ain't Broke Don't Fix It. One may add--use it.
Posted by smoothiex12 at 1:29 PM