In his magnanimous and subdued acceptance speech yesterday (today) US President-elect Donald Trump mentioned one very important fact--he mentioned that he was endorsed by 240 Admirals and Generals. As these elections and Trump's decisive victory demonstrated--whole, I underscore, whole, US media-pundit-commentariat "class", all these faux political "scientists" is a pile of steaming shit, who know next to nothing and all should be transferred to "work" red (or blue, or whatever) carpet at either Hammond, Indiana Independent Film Festival or flip houses of Hollywood "stars" who, I am sure, are filling applications for Canadian citizenship as I write this. Number 240 is a significant number when we talk about top level military people. It also signifies the level of true expertise which was availed for Trump and the only people who have more or less comprehensive picture of the world are military. It is the nature of the beast: not only you must know at this level most of mechanisms which run this world, you also must know the most important one of them--military power which is one of the pillars of national power.

American power is exhausted and it was stretched (or, rather, torn) to the point that it not only created a mayhem around the world, from Middle East to Ukraine, but it created a host of huge domestic problems, some of which are urgent and life-threatening. But why this power was exhausted? Because it was abused militarily first and foremost. If it is understandable that neither HRC, nor Nuland, nor her hubby Robert Kagan have any idea on the nature of military power, serious American military professionals sure as hell do have it. They couldn't fail to see where all this power abuse by neolibinterventionist cabal can possibly lead to. Today, it seems, these fears can be put to rest--it doesn't seem likely that US and Russia will go to war with each-other, bar some bizarre freak accident. Trump is not a war candidate and he was supported by a large number of top military people. See any connection? I sure do.

This all doesn't mean that US stops being Russia's opponent or, even, enemy. Only methods change and a lot will depend on Trump's foreign policy and national security team. But we may now reasonably expect more rational and conciliatory position on the number of key geopolitical issues which, actually, can be DISCUSSED. That gives me some hope. We'll see. But today is a calm day and I hope it is a calm before the storm of badly needed purges of American "elites" who brought US to the brink of a complete economic ruin and the world to the edge of WW III. These "elites", especially neocons, must be denied any access to serious decision making and policy formulation. Putting some of them behind bars could be a good start. I don't know what Trump will do, but I know that America I know--one storey, hard working, decent America--has spoken and, boy, when it spoke it sure as hell sounded like a roar. Look at the electoral map--it is almost all red and it is there where people go to work, raise families, go to church, and do not want any wars. This is America I know and for this America are my heartfelt congratulations--it gives America and the world a chance and we all desperately needed one. Donald Trump is this chance, a global one. But about this--later. But before I go, the United States has now one hell of an attractive and feminine First Lady. You can not argue with that. 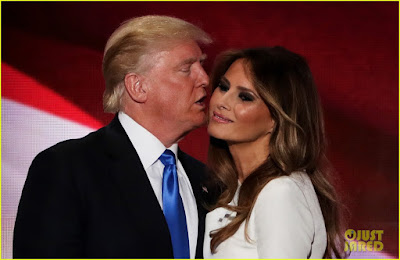 P.S. I will do my schadenfreude laps later too.
Posted by smoothiex12 at 6:50 AM