In 1995 the world saw the first edition of When Titans Clashed: How The Red Army Stopped Hitler by David Glantz and Jonathan House, both senior officers of US Army. With a single book these military historians rendered useless and inconsequential pretty much the whole army of Western historians such as Anthony Beavor who was left to write on Red Army "raping" 2 million, or 20 or 1.5 billion German women in 1945. A phenomenon of Glantz' and House's book was not in employing at that time the latest data from Soviet Archives and data provided in famous General Krivosheev's treatise Grif Sekretnosti Snyat (The Seal Of Secrecy Is Removed), later updated and reissued as Russia And USSR In The XX Century Wars, Armed Forces Losses. In the end, even before the book, despite Soviet, somewhat whitewashed, version of the events of the Great Patriotic War it was clear to many professionals that classic narrative of the First Period of that war, when Red Army was sustaining catastrophic losses can not be explained just by Stalin's purges of the Red Army or, what Shlykov called hiding "from complex and incomprehensible for them variety of qualitative characteristics of the military might of states with different social structures behind the thick wall of numerical superiority over the enemy". (c) 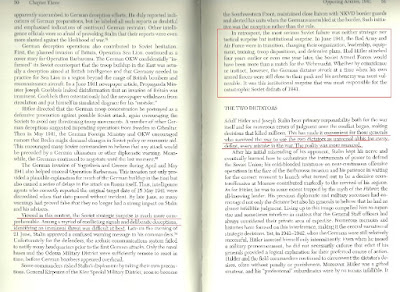 While one may or may not agree with Glantz' and House's conclusions (European "elites" of the time are directly culpable in precipitating WW II), there is no denial of the fact that they were able to struck a necessary balance between purely political and military narratives. They, in the end, correctly attributed initial failures of the Red Army to a much more comprehensive set of factors than some inability or purges. It is there, where Glantz and House make an extremely important statement, which is relevant to our discussion: 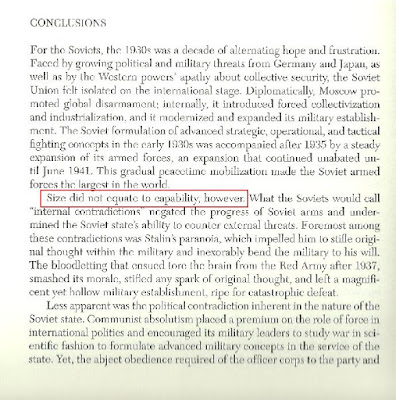 Omitting here a newly revealed facts of, indeed, a possibility of military coup in the midst of Red Army's top brass, which precipitated  purges, taking this (framed in red) military constant to heart is what we will do here. Size does matter but only insofar as this size is effective and properly deployed--pure quantitative comparison does not work and it shouldn't. Argumentation based on comparison of sheer numbers of personnel and equipment of the Red Army and Wehrmacht prior to the start of hostilities in June 1941 without comprehensive analysis of their respective effectiveness is a waste of time. Obviously, it is possible to measure dyadic (that is mano o mano) technological advantage of one force over the other:
But, as you can see, mere addition of weighted averages of tanks and aircraft doesn't tell us much. In the end, Saddam's army had many tanks and not all of them were old, by far more important was the fact that all of them were monkey models. Overwhelming technological advantage of the US and coalition in both Gulf Wars was never in question.

I elaborated slightly on an extremely simplified form of Osipov-Lanchester model, where I removed numerical coefficients of combat effectiveness. Once those combat effectiveness numbers are introduced the picture changes dramatically. We must ask ourselves several important questions when trying, using an example of, say First Gulf War, to get a grasp of this combat effectiveness. Will start with a simple question:

Was US average soldier better than Saddam's average soldier in that war? The answer is evident--yes. US soldier was more educated, had more tactical acumen, was better trained than Saddam's soldier. By how much? That is yet to be discussed, but US average soldier's advantage over Saddam's soldier was also in the very military system which the US soldier was part of, that is the way US forces were not only armed but how they were deployed. It is possible to imagine this same war without overwhelming US (and allies) air superiority and, while paying much steeper price in KIAs and time, US Army would still have overcome Saddam's Army purely on a vast superiority, apart from quality of soldiers, of its Command, Control, Communications, Computers, Intelligence, Surveillance and Reconnaissance capabilities, known to all as C4ISR. It is a fusion of human and technological factors which defines the "betterness" or otherwise of a soldier. Now, going back to Great Patriotic War. The question of comparison of the average Red Army and Wehrmacht soldiers is not even a fair one.

On the morning of 22 June, 1941 Wehrmacht was still fresh from its triumphant demolition of the best West European armies in a matter of weeks. The morale was extremely high, combat cohesion of units was high, many Wehrmacht soldiers and generals were battle tested and confident in their command. On 22 June of 1941, Wehrmacht was the best Army in the world history since Napoleon's Grandee Armee'. Wehrmacht in general, and its average soldier in particular, simply had an overwhelming advantage in this combat effectiveness department. Simple measure of a dyadic technological advantage (see illustration above) completely breaks down here when only quantities (slightly "enhanced" with the maturity of technology) are considered. Numbers still matter a great deal, but in the end, these are Alpha and Betta (reduced to a simple number very complex metrics) which are as important! But many in the "reformer's" club decided to merely list the numbers of tanks, aircraft and artillery pieces, where USSR had a noticeable advantage, as Shlykov did not on one occasion, to come to  conclusions, which almost cost Russian Armed Forces in 2000s their ability to fight a serious war. Remember, memorize this:

Alexey Isaev in one of his books on Great Patriotic War makes an excellent reference to Jack London's famous short story The Mexican.

"It was not a fight. It was a slaughter, a massacre. Any audience, save a prize fighting one, would have exhausted its emotions in that first minute. Danny was certainly showing what he could do--a splendid exhibition. Such was the certainty of the audience, as well as its excitement and favoritism, that it failed to take notice that the Mexican still stayed on his feet. It forgot Rivera. It rarely saw him, so closely was he enveloped in Danny's man-eating attack. A minute of this went by, and two minutes. Then, in a separation, it caught a clear glimpse of the Mexican. His lip was cut, his nose was bleeding. As he turned and staggered into a clinch, the welts of oozing blood, from his contacts with the ropes, showed in red bars. across his back. But what the audience did not notice was that his chest was not heaving and that his eyes were coldly burning as ever. Too many aspiring champions, in the cruel welter of the training camps, had practiced this man-eating attack on him. He had learned to live through for a compensation of from half a dollar a go up to fifteen dollars a week--a hard school, and he was schooled hard.


Then happened the amazing thing. The whirling, blurring mix-up ceased suddenly. Rivera stood alone. Danny, the redoubtable Danny, lay on his back. His body quivered as consciousness strove to return to it. He had not staggered and sunk down, nor had he gone over in a long slumping fall. The right hook of Rivera had dropped him in midair with the abruptness of death. The referee shoved Rivera back with one hand, and stood over the fallen gladiator counting the seconds. It is the custom of prize-fighting audiences to cheer a clean knock-down blow. But this audience did not cheer. The thing had been too unexpected. It watched the toll of the seconds in tense silence, and through this silence the voice of Roberts rose exultantly:

"I told you he was a two-handed fighter!"