So, here we are, with economics or, rather, economy which is the foundation of it all. I, however, want to warn  those who still believe that Wall Street  or Goldman Sachs is real economy--you may really not like what you will be reading here. So, for those of you who believe in all this FIRE (Finances, Insurance, Real Estate) "economy", before reading this, you may want to conduct a mental forensic experiment. Imagine what will happen if money would disappear. Of course, there will be chaos, but here is the thing, of which Russians, and I mean modern day Russians, who lived through 1990s, like me, know well--eventually people will barter. As long as any manufacturing still exists, people, under the most difficult conditions, will barter. They will find the market place and they will go with their burlap sacks of potatoes or carrots and will barter them for tires, cigarettes or diesel generators. Eventually the chains of distributors will develop and money will re-appear. The cycle will re-start.

Now, imagine what happens if the manufacturing is gone. Well, finances as we know them, will not exist, period. So, the issue of chicken and egg, that is what is a primer, is solved. After all, most economic schools agree on this fact--no production, no money. If Boeing goes down, the real impact of that is difficult to comprehend, but if tomorrow some shitty brokerage firm goes down, well..it may hurt a bit but life will go on. And it will also recover even if Wall Street goes down. In fact, the damage this condemned place, where crooks and the so called "economists" congregate, dealt and continues to deal to the world is so huge, that it is, in fact, desirable that this bastion of the corruption and selling of the air and phantoms, goes down at some point of time. Commodities exchanges can stay, though, and even then under some serious regulations.

So, now we can briefly, yet again, return to the expenditure. Let's draw a simple analogy: if I lived in the neighborhood where I had my house broken in constantly, including by armed robbers, under the condition that I cannot move away from this hood, guess, what I would do? Right, I would invest in weapons. I would buy several firearms, ranging from 9mm  hand guns to 12-gauge Mossberg, I would place them strategically (or, rather, tactically) inside my house and will hope that I will meet any son of a bitch trying to get into my house and harm my family with the barrel of my gun to his forehead, not the other way around. Here, I just described my personal military doctrine. Will this expenditure hurt finances of my household? Somewhat, but those expenses are all worth it, since they keep all kinds of scoundrels away from my home. What is most important here, with my very moderate income, just because I understand the value of a good round penetrating the knees or, in the worst case scenario, the forehead of some creep, my existence will be fairly safe, as opposed to some metro-sexual, and way more richer than me patsy, who can not stand small firearms or NRA. Will his money help him when he has armed robbers breaking into his house? Well, you all know the answer. All this analogies' drawing is very relevant to a discussion on the economic aspect of the war and military power.

It matters most what nation produces, period. Sure, Steel/Iron Production and Energy Consumption are the backbone of it all, but so much more goes into that. Energy Consumption is a key in understanding how economy works. No doubt,  MBAs working in Goldman Sachs do consume a lot of energy: from using their computers and lights in the office to charging their Teslas overnight, plus a lot of energy is spent hauling those important asses all over the world in the private jets, mostly for golf courses and their wives (lov...I mean sluts) cosmopolitan shopping. But this consumption of energy by those, mostly self-centered, a-holes pales in comparison to what a single middle sized manufacturing company consumes. In fact, to maintain a steady stream of useless iPhones and other, superficially "needed", consumer goods, enormous number of British Thermal Units (Btus) (or Joules) is consumed. It is difficult to explain to some "programmer" (and I know way too many of those) that iPhones do not grow on the trees and that even this (as any other smart(dumb)-phone) requires metals, plastics, silicon and other huge nomenclature of elements to be produced. This is a colossal consumption of energy. But don't rush to the conclusion that the more the energy, the more is production. It doesn't work quite like that. Consider this, consumption is not enough to "measure" energy, it is production of energy which gives a better perspective. Here is some info on actual production of energy:

Why it is so important to emphasize production as opposed to mere consumption? Well, this is military-political blog and we are talking here about military power. Let us recall what father, or, rather, one of, of economic liberalism Herbert Spencer had to say about economy. In his The Military And The Industrial Society in 1896 he states: "Whence it follows that the desire "not to be dependent on foreigners" is one appropriate to the militant type of society. So long as there is constant danger that the supplies of needful things derived from other countries will be cut off by the breaking out of hostilities, it is imperative that there shall be maintained a power of producing these supplies at home and that to this end the required structure shall be maintained. Hence there is a manifest direct relation between militant activities and a protectionist policy..." Surely, Spenser, should he live today, would be eating his words in regards to "militant activities" and a "protectionist policy", but, in general, he correctly identified the approach. In modern history NO real military power emerged without a first most important condition--an industrial capacity. Energy Production, in this case, is a crucial parameter, especially when one considers that weapons' production consumes an enormous amount of energy. Electricity is a key. Here is the wiki's list of electricity generation by countries. 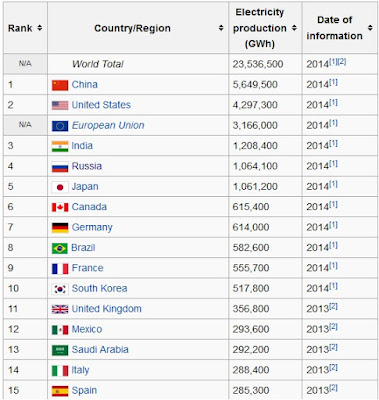 Here is per capita generation by the country. 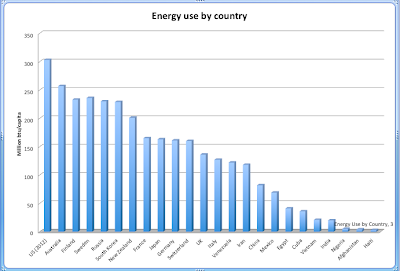 The first thing which jumps out immediately is the fact (remember, this is military blog?) of Russia generating net and per capita electricity which are the levels of a very developed industrial nations. Let's not stop here, let's review actually a Consumption as CINC model emphasizes. Yet again, Russia is in the top cluster of highly industrially developed nations.

One may say that Qatar and Saudi Arabia consume per capita more than Russia, in fact they consume more than EU and even US. But the trick here is in the fact that their consumption is driven by....well, nothing but oil extraction and air conditioning of their malls and houses. Truth is, they produce nothing other than oil. Electricity generation/consumption, when considered together with other resources, gives us a good insight into the path to being a real military power.

Steel/Iron Production? Absolutely, there are no weapons without it. Guns are made of it, tanks, ships and submarines. Shells and bullets, armor and...you name it--all this is steel and iron. But is it enough again? No. Same as electricity, iron and steel are produced, that is extracted, processed and produced, by many nations but even that is not enough to become a military power. Here is the list of steel production by nation in 2015.

But here is the trick again. China produces almost 10 times the amount of steel USA produces, and almost 12 times the amount Russia produces. Yet, while being a world's largest economy, China, while, certainly emerging, is not yet a global military power. Will just steel/iron production metric define China's emergence as military superpower? No. Neither will the full list of CINC. CINC fails us completely here, since Brazil, which produces a respectable 40% of Russia's steel output is hardly a military power, let alone a global one. Not even close. As we can see, while CINC model gives us SOME important metrics which cannot be disregarded, it fails to answer to the question of what really constitutes a military power. But we already are creeping closer and closer to the answer. So, let's not procrastinate. CINC criteria are just a small part of the answer which is, following Herbert Spenser's logic, in the number of the enclosed technological (industrial) cycles nation possesses. It is quite obvious for any common sense and mildly educated person, with the exception of course of "liberal" so called economists and all other "expert" types who propagate their rubbish constantly in MSM. Yet, none other than late Samuel Huntington mentions what it takes. Remember?

What defined "West's" domination was reduced to 14 points. West's domination (expiring as I am typing this) was achieved largely through military force. That's how it looks like.


3. Is the world's principal customer;


4. Provides the majority of the worlds finished goods;


7. Is capable of massive military intervention;

Out of those 14 points, highlighted 11, that is 78.6%, are directly connected to a very serious manufacturing or, in modern lingo, "real economy". If one throws away BS about "considerable moral leadership" (a delusion still propagated by Huntington's founded Foreign Policy magazine) and the point about control of all hard currencies, this share increases to 11 out of 12, that is roughly 92%.  It is also what makes one a military power. And even this list is still incomplete....