Oh goody, and why am I doing this? But, but, as was promised, I will start slowly to go at this, oh ever so important, issue of military power. The last straw, which broke camel's back was this "discussion", as well as the post itself, in Anatoly Karlin's blog at UNZ Review.

Considering the times in which I write this, it seems that this time is as good as any for starting to look at this most popular item on all kinds of military and foreign policy forums and blogs--yes, penis measuring contest and pseudo-scientific BS which is being regurgitated all over the world wide web. Even before we start, two things MUST be made very clear: when speaking about military power and before getting into this bizarre world of Osipov-Lanchester differential equations, salvo models, Operations Theory, strategies, GNPs, weapons and all other juicy mental and faux-patriotism masturbatory toys, these two very simple things are:

Thing (Question) Two: HOW TO use this military power within the framework which is created once the Question One is answered. This Thing is the kinetic embodiment of the Thing One. You remember, of course, from basic physics, that two types of energy are inter-transformable. This is the world of fighting doctrines, of technological and operational dimensions of a war, it is also the field which is so popular (for all the wrong reasons) on the web-resources of which I spoke above.

The issue of military power could have been settled easily for anyone who shares (I surely do) Correlli Barnett's definition of the national power: 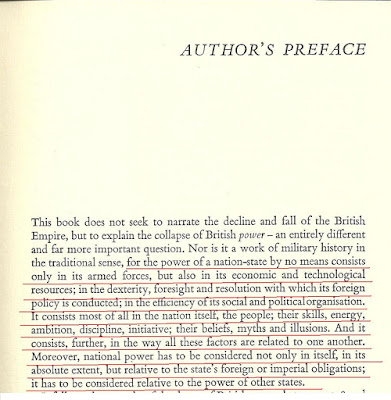 And, military power being a function of a national power, Barnett's definition could have been easily reworded for military power and I may yet do that. But the problem here is that of assessing military power, and giving it some "index", or "number", or "coefficient" or anything what makes sense for all those penis-measuring competitors. Well, here I come out of the closet and state it openly--it is impossible for simple two things--see them above in this post and  they are named Thing One and Thing two. So, before going into Formal Models Of Capabilities and Salvo Equations we, indeed, MUST ask ourselves the question: why do we need military power, what for? Any discussion of, assessment, or quantification  of military power without answering this question is a fraud, unscientific and irrelevant to the reality.

Here is a great example of appropriate "What For" thinking in Admiral Stansfield Turner's 1976 interview to Christian Science Monitor. He beautifully gives the range of things to consider when comparing Soviet and US Navies. 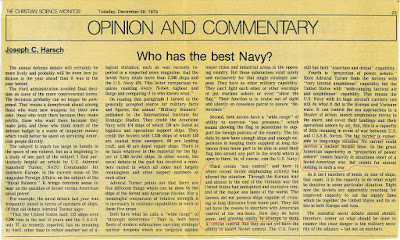 So, let's answer this question of what for in general:

Military power is needed to defend the interests of the owner of this power.

Here is a conundrum, what interests? And that is where the military doctrine of the entity (usually, state) building its military power comes forth. Military Doctrine is the SYSTEM OF VIEWS of the state on the building and use of its armed forces. Military doctrines differ, drastically. Enough to take a look at present day Russia and US. The former's main national interest is the defense of its state and is explicitly defensive, the latter--well, it is explicitly expansionist and expeditionary. So, whose military power is larger? Russia is manifestly non-interventionist state (we'll discuss Syria separately) and, in fact, does not posses military power to intervene globally, beyond the fairly limited sphere of its interests. The good ol' USA, however,  tries to hone its military power almost exclusively as interventionist. Is US military power larger in this respect than that of Russia? Absolutely. In fact, on the order of magnitude. But here is the catch, unlike the US, Russia IS NOT interested in this capability and is not intent in competing with the US in this field. Russia is not planning ground (amphibious) assault on US territory, she also has no contingency plans for combined arms warfare operations around Chicago or Boston. Russians, generally, do not live in the fantasy world when it comes to military. US, on the other hand, while being the backbone of NATO, DOES have contingency planning on not just bombing Russia into oblivion (Russia does have same contingency plans for US) but also on amphibious assaults and combined arms operations within Russia.

So, we start with the doctrine(s). There is no other way to approach the assessment and quantification of military power. In this case, the Composite Index Of National Capability (CINC) may come really handy but even here we have to keep in mind what Stephen Biddle calls "empirical anomalies".