To write about "missile era", "coastal combat" and describe small, missiles' armed US Navy's fictional Cushings to demonstrate an example of real naval combat--that is a heresy in the US Navy, which, as none other than Elmo Zumwalt put it, got used to "travel first class". Yet, Hughes' book gained a cult status among both naval aficionados and professionals, some of whom, such as Admiral Blair (at a time, C'n'C of Pacific Command) or Vice Admiral Lauthenbacher Jr. (at a time, Deputy CNO), gave the book and the author absolutely rave reviews. I can only join in my deepest admiration for Captain Hughes and his brilliant mind.

The ongoing disaster with LCSs and huge issues with AD/A2 for US Navy only underscored the problems which develop with the fundamental premise of the Sea Control (that is, largely, US Navy) fleet, as Hughes puts it, is "Saying that navies don't "purchase and possess real estate" as armies do is to emphasize the navy as a means toward the end of controlling an enemy on the ground. Rarely is the center of gravity of a conflict on the sea or in the air." The international consensus, at least for the last two decades, is that the US Navy is doing just fine when providing the freedom of the seas and keeping Shipping Lanes Of Communications (SLOC) open. The set of the problems emerges within littorals, the coastal combat and US Navy's function of  Force Projection when it is against, and you may have guessed it already, peer or near-peer power. Of course, the US Navy thinks that it can fight and win the battle on the high seas, or open ocean, against any enemy and here US Navy has ample reasons to think so--it is, presently, undeniably the most powerful navy in the world with a superb naval tradition and combat history. But magnificent naval battles Americans won against Japan on the WW II teach only limited lessons on the modern combat. Why it is so is quite obvious--nuclear weapons and anti-shipping missiles.

US Navy, at least its Carrier Trade Union, doesn't like anti-shipping missiles. So much so, that I will simply post here the scan from Admiral Zumwalt's marvelous memoirs  On Watch: 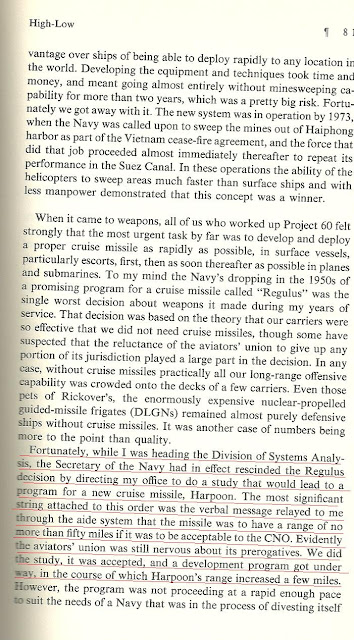 You can easily make your own conclusions on what can only be described as the sabotage of anti-shipping missiles (ASM) development in the US Navy. No surprise then, that even today US Navy cannot deploy any true supersonic, let alone hyper-sonic, ASM. But here is the issue--some other power, of which we speak not as of yet--does have those and, apart from understanding their utility for fighting on the high seas, it developed this absolutely atrocious idea that those Mach 2-3, long range ASMs, with the development of miniature solid state electronics and improvement in propulsion could be very valuable in the littoral. Moreover, one doesn't have to spent 12 billion dollars to attain the saturation threshold of ANY air defense system to solve this one and only, most important, contemporary problem of any navy--the problem of a "leaker". In fact, this could be done for a relatively small price and can (and it did) solve the issue of the safety of own littoral. After all, the final target the fleet is on the land. It is there, where hostile government has a seat.

For decades, during the Cold War, naval staffs of both US and USSR were calculating the probabilities of success, respectively, in attacking and defending the Soviet/Russia coast. And it was then that Russians invoked the spirits of Jeune Ecole  and its radical, for its time, ideas that, as Theodore Ropp summarized it about Jeune Ecole:

1. The weaker fleet would stay at its bases and refuse combat.

2. The stronger would be forced to do the same, for fear of the torpedo.

3.The only significant naval activity would be commercial warfare.

4. Warfare would be absolutely merciless, disregarding the laws of war.
You can read Eric Dahl's brilliant expose on Jeune Ecole in Naval War College Review here:
NET-CENTRIC BEFORE ITS TIME The Jeune École and Its Lessons for Today

We do not concern ourselves here with pps.3 and 4, since they require additional, and extensive, elaborations, but pps.1 and 2 capture the essence of the Coastal (or Littoral) Combat superbly, when pp.1 is corrected with addition of a single caveat:

The weaker fleet would stay at its bases and refuse combat on the high seas.

In the littoral, however, under the defensive umbrella of own coastal aviation, screens of SSKs, which are honed for operations in this type of waters, the weaker fleet, armed with modern ASMs and well networked, becomes a true deadly menace for any navy. What used to be called a mosquito fleet becomes capable of sinking any enemy ship thus rendering enemy's capital ships useless when trying to "project force"  and that may have truly strategic, and even global, ramifications. Just like that. This reality is beginning to dawn on US Navy. Hence, however disastrous, program of LCS, which was based on Admiral Cebrowsky's "Street Fighter" concept (correct one, I may add).  In the end, FERs (Fractional Exchange Rates) do define the outcome and there is no better exchange rate (including financially), then to provide conditions for 1 billion dollars worth of assets do the job  on the force whose monetary value runs into tens of billions, while its mission could be killed by about 10 to 15 million dollars worth of leakers.  This is an excellent exchange rate from any point of view. Thus is A2/AD issue which torments US Navy today--at least it is an indicator that the Navy with so much combat history is trying to stay realistic, despite a horrendous news of the production for the sequel for Top Gun ;-) That is scary...... 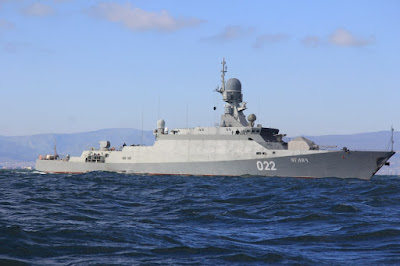