The idea of a small ship capable of carrying out large tasks is, certainly, not new. After all, already mentioned, Jeune Ecole imagined naval combat being conducted by the swarms of small torpedo and cannon-boats, which would be controlled by the telegraph. One of the main factors which influenced Jeune Ecole was the invention of the shell and Canon-obusier (or shell-firing cannon) by Henri-Joseph Paixhans, which changed drastically, including an improvement in accuracy, the main striking weapon of the fleets--naval gun. Russians demonstrated the effectiveness of Canon-obusier in the Battle Of Sinop in 1853, when Russian Squadron defeated Turkish Fleet. The shell-firing cannon came of age in this battle. It also made it onto the small ships. 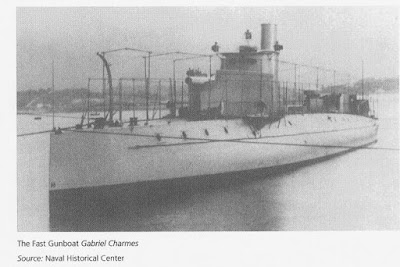 We know the rest of the story, that is until new weapon emerged.

This weapon sent shock waves through naval world, when on 21 October  1967, Israeli Navy's INS Eilat was sunk by a two-missile salvo of Soviet-made Anti-Shipping Missiles (ASM) P-15 Termit (Styx), launched from Egyptian Soviet-made Komar-class (Project 183) small missile boat. The fact that the boat with 61 ton of displacement could sink a 1700 ton destroyer not by a torpedo seemed obscene at the time. Well, it is not obscene anymore. As Operation Trident by Indian Navy in 1971 demonstrated to a devastating effect--few Osa-class (project 205) boats armed with Styx  ASMs were capable to achieve a strategic result despite a minuscule displacement of combatants. And then, of course, came Falkland War which was an eye-opening experience for many in Anglo-Saxon naval community. Royal Navy did its duty well and won the war but paid a steep price. ASM not only has arrived as a viable naval strike weapon, it has arrived as THE weapon of the naval warfare, which was a really bad news for the US Navy's carrier trade union.

Sure, one may say (and many do) that mosquito ASM capabilities are really not that great. Sure they are not by the very fact that this kind of fleet is called Mosquito for an engineering (and Russian convention of naming its missile boats classes after mosquitoes)  reasons and is not capable to carry an immensely important component of ship's defense--a capable Air Defense Complex. Left to its own devices, any missile boat ends like the Libyan Fleet in the action in the Gulf Of Sidra in March of 1986 against....US Navy. The chances of these few Libyan boats, armed only with Osa Air Defense Missile Complexes against overwhelming fire-power of the US Fleet were, frankly, approaching zero. But in this operation, as well as in Falkland War, both US and Royal Navies fought what was essentially Sea Control Battles against the opponents who would attempt to challenge them in what today could be termed as A2/AD  (Anti-Access/ Area Denial) framework. Argentinians, although defeated, fared incomparably better than Libyans. It took Royal Navy's HMS Conqueror and outstanding performance of RN's pilots from British carriers to break Argentina's attempts to deny Royal Navy access to the occupied islands.

The outlook for the Mosquito fleet, however, changes drastically  when it is deployed and used  properly. And, as both successful (sinking of Eilat) and disastrous (Battle Of Latakia) for Arabs use of the missile boats demonstrates, they can be used from the naval base location, without any deployment even within nations' littorals. The problem with Arabs, though, was in the fact that....well, to put it mildly, they had neither means nor abilities to use their boats effectively. In fact, in this funny business of Sea Denial, A2/AD, what have you, the main thing is, as Admiral Sergei Gorshkov pointed out in his The Sea Power Of The State  (not the Sea Power AND The State as it is known in the West), interaction.  In other words--you want to deny the enemy access, say, to your littoral, be ready to do it with the use of heterogeneous forces which will be able to interact--that is act in concert towards achieving the same A2/AD goal. For the green water fleets, and it is there where the bulk of the "mosquitoes" to be found, which are run by even mildly competent leaders--the main task will remain to provide conditions for the missile boats to launch their main weapon. To do so, they will need to avoid the fate of Libyan missile boats in the Gulf Of Sidra. That means two major conditions to be fulfilled against the navies which count Force Projection as their main doctrinal goal and that leaves us with very few navies in the world, headed, of course, by the US Navy and its whole structure honed for blowing shit up anywhere in the world where alleged US national interests are "threatened"--these conditions are viable Air Defense and ASW (Anti Submarine Warfare). Today, there is only one navy in the world, which can provide, however barely, the existence and survival of its mosquito component against any adversary--Russian Navy. Russians always had pretty good understanding (and experience) of the shortcomings and advantages of the missile boats and that is why today, Russia develops not one but two different types of the missile boats, which will be able to fill the niche inside the heterogeneous forces package, capable to deliver needed amount of high explosives to the pre-determined location at the pre-determined time. In fact, Russian navy deploys today the only boats in the world capable of purely naval combat (that is against surface targets) and for the strikes to a strategic depth on such theaters as Europe or launch missiles from Caspian Sea to Persian Gulf.

I propose, that the development of these kinds of ships (boats) and of the missile complexes they carry is completely new, paradigm-shifting, development but before I continue, hopefully during the Labor Day weekend, I want to make some important points.

Disclaimer: I know, there are armies of internet "warriors" who browse world-wide-web constantly in search of the virtual fights and who do not understand that behind all this fancy military lingo is the reality of the combat with blood, suffering, torn limbs, horrible burns, torturous deaths. I am terrified by the possibility of Russia and US going to war, but I am also terrified by the blood-thirst of all kinds of patriots who are ready to fight somebody, while sitting in the chairs as I am doing now.

I have a profound respect to US Navy, its glorious history and many people, who served and still serve there, some of those people are my closest and dearest friends and they are not war mongers. However, the continuation of the posts on mosquito fleet, inevitably, will lead to a description of the scenario which is in the air, but, hopefully is not becoming a reality, in which US Navy will try to test Russia's littoral defenses and this scenario will, certainly, involve participation on a massive scale of Russian Navy's mosquito capabilities, which, as some already guessed, will be covered in the air and from beneath by necessary means which, in Russian language, are called Naryad Sil  (Required Force--what is Naryad and why it is called as such, in English it means dressed, is a separate discussion;-)   Meanwhile, I leave you with the question of why late Admiral Cebrowsky's (hell, try Zumwalt and his Project 60) ideas of Street Fighter will not work in US.