There is a lot in US Armed Forces which can create a respectful and a professional attitude towards it. American soldier is generally a good soldier and there were some serious contributions by US military professionals to the art of war. US Army currently is second largest in the world, is best equipped and has a significant operational experience. That is why the statement by Lt. Gen. Ben Hodges, the commander of U.S. Army Europe, two days ago can only be viewed as highly unprofessional. The esteemed General "confirmed"  "that even beyond the 12,000 soldiers, the Russian military is casting a large shadow in the Ukrainian conflict in other ways. He said that there were 29,000 more Russian soldiers located in Crimea that Moscow annexed from Ukraine last year."

Ben Hodges: Ukraine Getting Weapons From US Would Put Pressure on Putin

The issue here is not Russia "casting a shadow", that is understandable and if Russia wouldn't cast this shadow, Putin would have been overthrown by now. At issue here is this "12,000" Russian troops, as was "estimated by US Military". For a graduate of a respected West Point Military Academy, an officer with a huge combat and operational experience, it is strange to hear him articulate something which no serious military professional in the world takes seriously. It is Ben Hodges' full right not to like Russia, in fact, even if he hates Russian guts--it is still OK. What is not OK for a high level cadre officer of the US Army is to repeat some claim which is so preposterous that it contradicts every single bit of knowledge about Russian Army's order of battle, doctrine and combat manuals--these are precisely the things Ben Hodges, as a Commander Of  US Army Europe MUST know as a professional. That is what officers are taught in any serious military academy and then follow on throughout their military careers--a potential adversary.

1. There are many Russian volunteers fighting for Novorossia. How many? I don't know, but the number is substantial, it could be in thousands.

2. Does Novorossia's Army (VSN) receive С4SIR help from Russian side? Absolutely. Again, if help wouldn't have been available, Putin would have been at this point a former President of Russia.

3. Are there (in Donbass) operatives of FSB or GRU? I am sure (and this is a hunch) that there are. How many? I would take a wild guess--between hundred and two hundreds.

4. Who are those numerous Russian volunteers? Many of them are people in their 40s and even 50s--a veterans of the Soviet Armed Forces.  There are many young people too. But it is this generation of 40 and 50 year old guys who have a very good combat experience (Afghanistan, both Chechnya Wars, Caucasus hot spots etc.) and an intimate knowledge of the field and combat manuals.

5. Are present, cadre, officers of Russian Army there (not just GRU or FSB)? Possible, but this number of "vacationing" professionals is not large.

Now, what US Military analysis offers us here is a "new word" in the art of war. This so called "analysis" suggests that Russians manage to introduce a division size organized force into the conflict with the corps size operations and nobody still didn't find a single evidence of those pesky Russian rifleman being there. That means that movement of 12, 000 troops through the border of Russia and Donbass, was missed by a superb US Intelligence and Reconnaissance capabilities, including its satellite grouping. Well, now comes the fact that even Ukrainian top military brass openly states that there are NO Russian troops in Donbass.  Field officers also know it.

There are no regular troops in Donbass

The case of debunking these fairy tales created in the sick minds of
likes of Victoria Nuland or US stooge in Kiev Arseni Yatsenyuk is really simple. But I'll take a very short path (among many) to put it down. If there would have been a division size regular Russian Army unit in Donbass, the Ukrainian Army (what's left of it anyway) would have been now feverishly taking a defense around Kiev. Kiev knows it and, what is sad, Ben Hodges himself knows it. I can not believe that American military professional of this level doesn't have a good idea about how Russian Army fights. He is paid to know it. His statement, thus, could only be judged as a toeing the party line set by neo-con sociopaths in the top levels of government. As for General's cliche that "When mothers start seeing sons come home dead, when that price goes up, then that domestic support begins to shrink"(c) I would suggest to him to study Russia a bit deeper. Especially her military history. The West Point Military History Series, such as The Second World War, written under the supervision of Series Editor General Thomas E. Griess, of Department Of History of US Military Academy, is a good primer. But if US "military analysts" want to continue to live in parallel universe--it is their choice (is it?) but the power of OODA Loop, especially of those two O's remains unchallenged. I saw a political career of a great man, great American military leader destroyed publicly for the whole World to see and it made me sad. 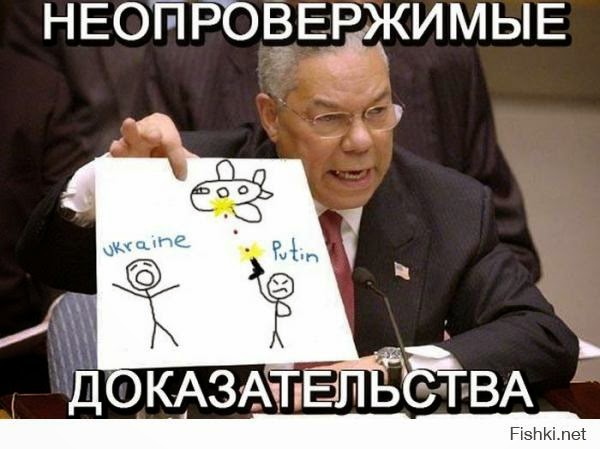 The Russian caption in this picture reads:"irrefutable evidence."