The story of the defeat of American geopolitical realists and of the ascendancy of the neocon (or hawks, or interventionists or what have you) cabal to the top of US foreign policy power is a story of mutation of the once great Sci Fi Channel, away from Twilight Zone and The Outer Limits, into the SyFy Sewer and the list of shows which includes such highly intellectual and enriching titles as Sharknado, Stonados, Robocroc and the Crock O' Roboshit. The parallels between degeneration of once great cultural asset and total implosion of the US foreign policy, both doctrine and the institutions which implement it, are both warranted and astounding. In fact, they defy imagination. Forget about purely occupational issues of diplomacy where even American professional diplomats admit that


It is more serious, way more serious than even selling ambassadorships to the highest bidders--the practice which is as American as apple pie and baseball. 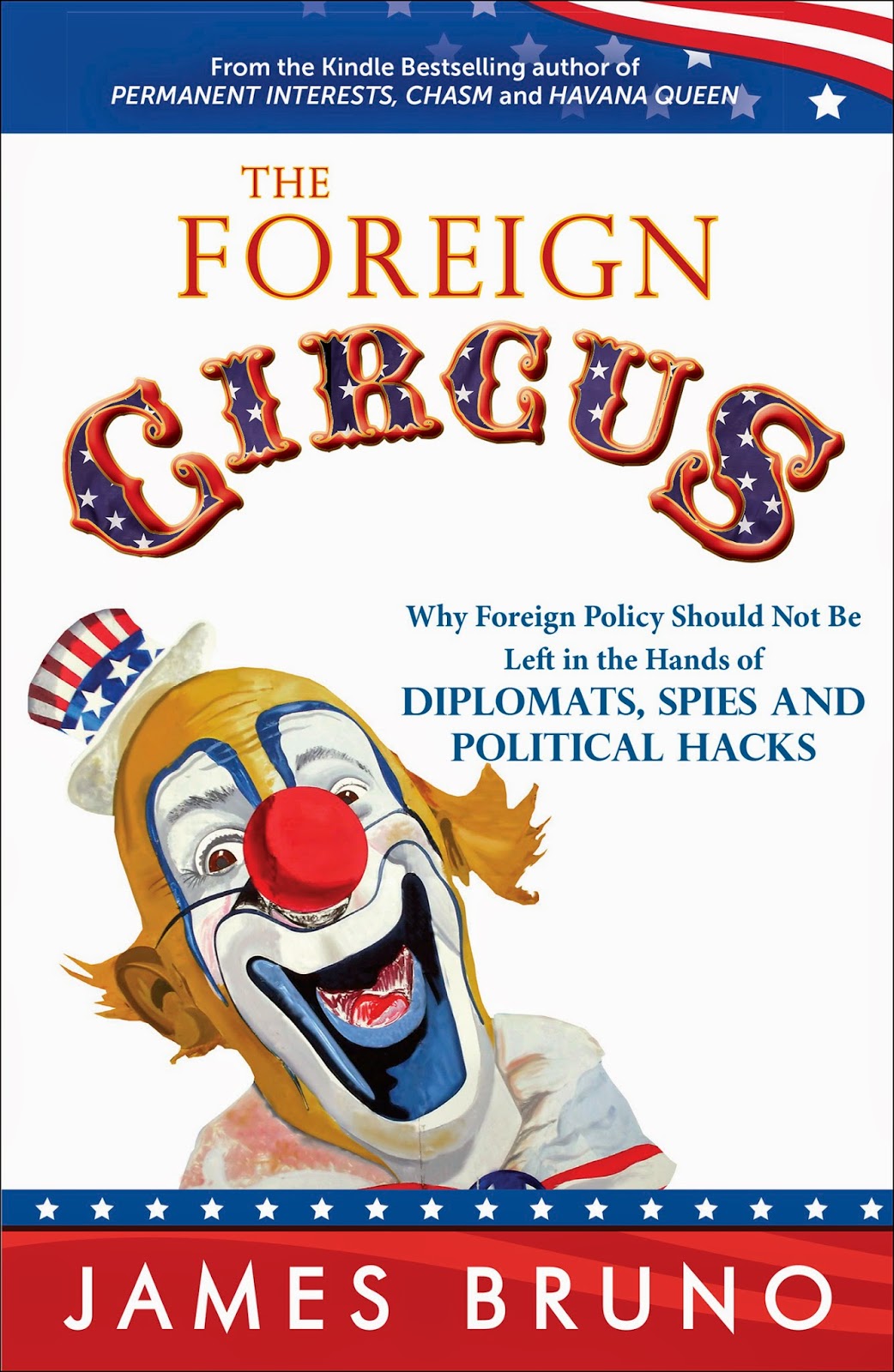 From the book jacket:

Our foreign policy is in the hands of the clueless, the self-serving and the politically corrupt. Read this book first. Then fill out papers to emigrate. The author provides a first-hand view from inside the belly of the beast of the U.S. foreign policy establishment. His insights are so spot-on that government censors have blocked out whole sections of text. The Foreign Circus will have you alternatively laughing and shaking your head. And when you read tomorrow's headlines, you'll have a better appreciation why Washington screws up.

I mentioned Colonel Boyd's loop before, as well as elaborated in length on the issue of war,  for a reason. Understanding the US debacle in Ukraine is difficult without it. That is also why this post on sand castle geopolitics, is going to be lengthier than the previous ones. This post is a part of a summary. So, OODA loop it is.

I am sure some numerous doctorate theses will be written on this issue but within the framework of the Russian-US conflict over Ukraine  (in reality it is more than just that), it is already clear that the US doesn't observe what it should (or must) in order for it to "defeat" those nasty Russkies and evil Putin. For starters, the US doesn't know Russian people. It never knew them, but at this stage the problem is compounded with what I mentioned before--a death, or a state close to it, of a field of so called Russian Studies in the US. When, hailed as the preeminent  American "Russian Scholar", Michael McFaul doesn't know the difference between Russian words reload and overload (remember the reset button snafu?) what does it say to us? A lot. Know thy enemy (c) as Sun Tzu suggested, was never a strong feat of the US. Here are some key issues:

a) American "Russian" narrative has been formed and largely remains unchanged since the early days of the Cold War 1.0 and it is largely created by the same kind of people who did it for more than 70 years now. Those are all kinds of "Soviet/Russian dissidents", many of them Jewish and USSR/Russia's other minorities immigrants with an axe to grind. As was stated earlier, basic facts of Russian life are simply not available to policy makers and care takers who are being fed a steady diet of opinions and assessments by the supposedly "Russian people", who exhibit a strange similarity, often well funded by foreign NGOs, in their views. That is in a sense of delivering NOT the facts on the actual state of the affairs but fitting (sometimes bending over) facts, by means of careful selection, to a narrative. And, of course, the narrative is about the exceptionalism of American political and economic models. Nobody cares, in this case, that those people represent virtually nobody in Russia and that they observe nothing. The obsession, as an example, of the American "elite" with Solzhenitsyn in 1960s and 70s had nothing to do with the merits of his books, especially since his outlandish numbers on the GULAG have been debunked many times by professional archivists and historians. This obsession was based on a desire to have a moral high ground. What these "elites" didn't observe was the fact that Solzhenitsyn went to the place very few can go in Russia and that is the Great Patriotic War. Solzhenitsyn went there and he got burned, including by his open lies about real events, such as liberation Of Prague in 1945, among many. One doesn't do such things in Russia and then expect to maintain his status.


But Solzhenitsyn is just one such example among many. For the average American intellectual the whole notion that overwhelming majority of Russians either doesn't give a rat's ass about Pussy Riot or, in the "worst case scenario", merely want those sluts to move elsewhere--how about US and then do their act at Arlington National Cemetery--is an incomprehensible fact. After all, how would this intellectual know that The Cathedral of Christ The Savior was built as a national monument to the War of 1812, you know--the real one. It is, in the mind of such an intellectual, a great proof of Russian backwardness and lack of appreciation for the values of liberty and democracy, freedom of speech included. So, the whole notion of the overwhelming majority of Russian people not willing to have such values, which allow desecration of Russia's holy places, being patriotic or nationalistic is perceived as just a small fact, nuance in, otherwise, desire to become like the US. What would happen if Lavrov met with people who desecrate Arlington National Cemetery?  Of course, this whole thing is just the opposite. For the nation which was forged in war for a millennium, moral and spiritual necessities of  Continental Warfare trump any "freedoms", as perceived today, however desired by some, when  push comes to shove. And it comes too often for Russia--the issue of national survival.

Does it all mean that there are no American professionals who are aware of that? Of course not. There are still some American academic, diplomatic and intelligence professionals who do understand all those fairly simple things. But knowledge alone is still not enough, until it is internalized and thus becomes an understanding and influences institutions and, with it, policies.

b) The United States continues to observe in Russia what it wants, not what matters. That is why it took US media about two months since the coup in Kiev to recognize the significance of the St. George ribbons worn by the people of Novorossya and Russia. The connection between those ribbons and the history of, primarily, the Great Patriotic War is sacral, but then again, who at NBC, CNN or the WSJ knows about who really defeated Nazism. Going even further back in history, who of those journos heard of the Guards distinction in Russian history. Hanging out at the soirees with Moscow or St.Petersburg's  "liberals" and some oligarchs doesn't help--those types neither know Russia's history nor have any particular affiliation with it, as their policies of the 1990s, implemented with the help of American "consultants" (aka "Harvard Boys" in Russia)  proved beyond the shade of a doubt.

So, Observation, which is crucial to the appropriate operational set up is, politely speaking, flawed. It is akin to famous Al Pacino's "They don't see me coming" and they didn't see it coming.

Don't let them see you coming

Observation is a weak point: it misses things which matter, it registers only what fits the narrative and it singles out what, otherwise, must be minimized or discarded as the side lobes in radar. The tragedy of the situation is in the fact that American "elites" finally bought into their own narrative, they believe in it. This brings forth a second issue.

It is not difficult to predict that orientation based on false premises, incomplete or, altogether skewed observations is, well, bad. The fact is, such orientation is not orientation at all. Caricatures are just that--caricatures. Nations, normal ones, do not live in the make believe world. Russians DO CARE about Continental Warfare, they are keenly aware of it and it is a part of their cultural DNA or, as some define it, a masses' subconsciousness. Average American Joe, seeing Belgrade being bombed, or some other shit being blown up, enjoys the view, average Russian Ivan sees a human tragedy and suffering and projects it on his own habitat. That is the difference in the conditioning. Russia cried for the victims of 9-11 tragedy, US media blamed Putin (and Russia) for atrocity in Beslan. Average Russian Ivan (forget about professionals) does consider a possibility of the Russian cities being  bombed and, seriously, considers living under the conditions of shortages of just about anything. In fact, very many Russians are prepared for that--that's what being invaded for a millennium does to you.

But here is the problem, US continues to live through one Chalabi moment after another. No, Iraq didn't meet "liberators" with the opened arms. Today we know the result of "Iraqi Freedom"--it is anything but. But in the nation (is US a nation today?) where strategies are formulated by the Wall Street bankers,  journalists and other Ivy League "educated" political "scientists"  no other outcome is possible. It did happen before, when highly agitated and very popular French journalist Gabriel Charmes, together with his naval counterpart Admiral Aube, conceived a disastrous naval reform known as Jeune Ecole, which was, to a large degree, based on the idealism and sheer ignorance of French perception of "democracy" of the 1880s. Even torpedo boats were called democratic. For France it all ended up badly and the reason for it being ignoring of the economic and strategic (and operational) realities of the age. The foundation of this magnificent failure was incompetence and subversion by the purely civilian ideologue (Charmes)  of the military institutions. When I listen to the stream of sheer geopolitical idiocy being spewed in the media by professional "economists" such as Nobel Prize Winner Krugman or some professional political "scientist" turned politician in the media, my first reaction is to scream, but then I turn to Arkady Averchenko's immortal "The Specialist In Military Affairs", pour myself a shot (or three) of a good bourbon, light a cigar and turn on some good fusion and fade into thinking of what should be written about DA, which is Decide and Act. It is too sad to contemplate.