"A bad cause seldom fails to betray itself", Federalist #41, Madison.

What was bound to happen, did happen. Russia buying Mistral-class LHD from French DCNS turned into something that could only be conceived under the influence of LSD-- that how  mind-boggling the surrealism of this whole Mistral affair is. Not that  Russian political top wasn't  warned--it was, but the Russian top at the time of the contracting France for Mistrals was afflicted with the same disease as its Western counterpart--both suffer from the dictatorship of the managers and their stooges who serve them. When you have the "class of managers" (that is how Vladimir Putin characterized himself at some point of time-a manager for Russia, he may yet to reconsider) who allegedly know HOW to run a system while not understanding how the system works, one gets Mistral soap  opera. Lawyers, economists and doctrinal and operation requirements do not mix.

It was clear from the get go that Mistral purchase was not just a furniture specialist turned Russian Defense Minister  Anatoly Serdyukov's idea.  The "deal" stunk to heavens from the inception and was approved at the very top, allegedly by Medvedev himself and, most likely, by Putin too.  Being allegedly a political (and fiscal) favor to Nicolas Sarkozy (and France) for his role in mediating a Russo-Georgian conflict of 2008, for the Russian Navy it would have been better if those 1.5 billion USD for these two French glorified ferries were given directly, as cash, to whatever fund or trust in France. But no, the Russian Navy was chosen as the lab rat for a bizarre experiment. By buying Mistrals, whose actual combat value is dubious at best, Russian Navy was forced to absorb, at the time of its still very fragile state, the capability which not only was excessive but harmful for the plotting a clear path to the future.  In general, loading any force with capability which it does not need impedes the performance of this force greatly.  Little did John McCain know that calling for the halt to the sale of Mistrals by France he was doing a favor to Russian Navy. Should he have known that, I am pretty sure, he would reconsider.

The fundamental issue with the Mistrals is very simple--Russia does not need such an amphibious capability. All arguments of the Mistral's proponents about some mysterious needs for Russia to project force (on land) are sunk by the geographic and strategic maritime realities of Russia. Vessels of Mistral-class are not survivors in the maritime peer-to-peer or peer-to-near-peer environments. In fact, the existence of any amphibious asset in the serious combat environment depends almost entirely on the ASW and Air Defense capability of the Amphibious Group which is formed around such an expensive ship or ships and is provided by the escorts. As demonstrated here on the example of the US Navy's Expeditionary Strike Group. 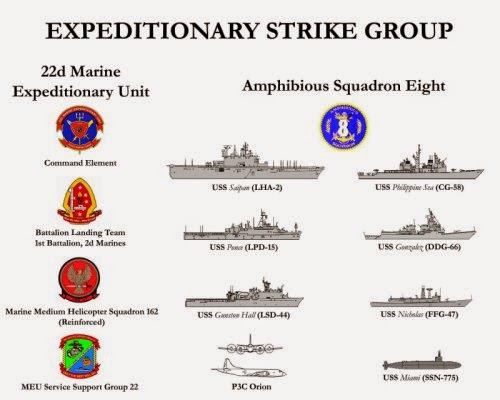 The only real naval combat contribution such a vessel can offer is Command and Control  and ASW, when she carries ASW helicopters.  It is one thing to project the power against some third world nation, totally another--to project it against any nation with even a modicum of military capability. The events in Ukraine answered all questions about Mistrals.

1. At this stage Russia does not have necessary surface and submarine force to be herded into the couple Amphibious (Strike) Groups and thus provide pre-conditions for the Sea Control, on which any fixed or rotary wing aircraft carriers depend.  Forming such group(s) means only one thing--withdrawing surface and submarine assets from much more important tasks of actually defending Russia's national interests;

2. Russia really doesn't have any overseas interest which would necessitate any serious amphibious power projection. None! Any ad nauseam talk about Kuril Islands, where, God forbids, in the case of war, one of the Mistrals will encounter world-class Japanese submarine force, or allusions to Russo-Georgian War of 08-08-08 serve only as a pathetic shaky attempt to exonerate a horrendous strategic blunder. Existing and prospective, domestically-made, amphibious capabilities will do just fine for whatever power projection necessities Russia has. This is confirmed today by the source in Russian Military-Industrial Complex. The ships of such class are planned in Russia's Shipbuilding Program.....2050. Surely Russia needs this capability so urgently that...well, no comments.

3. Famous Russian (actually, Soviet) anecdote goes like this: one of the workers on the Soviet weapons factory bought a crib, produced by the consumer goods department of this factory (very many Soviet Military Industrial Complex facilities did produce so called ShirPotreb, or consumer goods). The worker comes home with the box containing disassembled crib and starts reading the instructions on how to assemble the crib (IKEA routine). After couple of hours he finishes the crib's assembly and gets as a final product....AK-74. He disassembles the crib and reassembles it again, in different order. You may have guessed it already--he gets AK-74, again. Russian Navy is akin to this crib--one cannot assemble this force without getting as the final product a classic Sea Denial, or as it is fashionable today to specify, Anti-Access/Access Denial (A2/AD) force. Period. No other foundation, without betrayal of Russia's  national interests is possible. The foundation of the Sea Denial force as both Soviet Navy was and current Russian Navy is beginning to emerge is the force capable to sink or deal an unacceptable losses to any combination of the hostile naval force (or forces) trying to attack the shores of Homeland--and that means powerful surface and submarine components, it also means a shore based aviation. The role of Mistrals in that defense is zero, other than to serve as a magnet for a couple torpedoes or guided missiles. This is not the exchange rate one would like.

If France fails to deliver Mistrals, Russia and her Navy should finally exhale with a relief, get documents for arbitrage ready and find a better use for those 3 billion dollars (that sum  includes penalties) in the newly emerging Cold War 2.0. Those funds in the times of a shrinking budget and a full blown economic (for now) warfare by the West against Russia could, certainly, help to expedite some truly crucial, for Russian Navy,  programs such as new destroyer or will buy three Yasen (Graney) class SSGNs. As for Serdyukov and his handlers...well, Mistral embarrassment will be with them for a long time. John McCain, meanwhile, should double his efforts to prevent Mistrals' delivery to Russia--there will be many Russian naval professionals who would thank him for that.