That's Russia For Ya.

I always say that Russian military-industrial plans are to be taken with a grain of salt but not because Russians overstate, but for exactly opposite reasons. Recall initial officially disclosed parameters for 3M22 Zircon--something slightly above M=5 and 300-400 kilometer range. Well, we know now that it is Mach=9 capable weapon with the range in excess of 1000 kilometers. You also recall the ceremony of laying down two newest Amphibious Assault Ships of project 23900 held a month ago, right? Remember how those ships were described? 25,000 ton of standard displacement, 28,000 tons of full. Right. It is Russia, alright. Now TASS reports, in Russian, that the actual displacement of these ships will be way in excess of 30,000 tons.

Not just that, but now, it is reported, they will carry recon and, what is most important, strike UAVs which, apart from impressive amphibious capability, makes these ships a rather interesting mix of LHD and, ahem, cough-cough, aircraft carrier. What kind of UAVs and with what capabilities will be based on these ships at this stage is a matter of pure speculation not to be taken seriously. But this news may hold some answers:

The first Sukhoi S-70 Okhotnik (“Hunter”) attack drone should be delivered to the Russian military in 2024 after the Ministry of Defense demanded to speed up the experimental work on the upcoming unmanned combat air vehicle (UCAV). With the testing of the aircraft’s armament initially planned for 2024, the UCAV was supposed to enter service the following year. The deadline has now been reduced by a year. "We received an assignment from the Defense Ministry to speed up the experimental design work and maximally adjust the schedule in order to begin the deliveries already from 2024,” United Aircraft Corporation (UAC) Head Yuri Slyusar said, as reported by TASS news agency. “That is why we are actively working with colleagues on this issue."

No-no, it absolutely doesn't mean that S-70 Okhotnik will be a part of their air wings--this UAV is too large and too heavy to be ship-based. The significance of this news is in the fact that Russia in a very short period of time went from importing UAVs (Israeli ones) 10 years ago into a development of the state-of-the-art UAV with outstanding, unmatched really, payload and combat network capability, which also implies extremely advanced electronic components and AI algorithms. So, it is totally logical, in fact, almost inevitable to assume that a smaller, ship-borne version of S-70 could be in works. 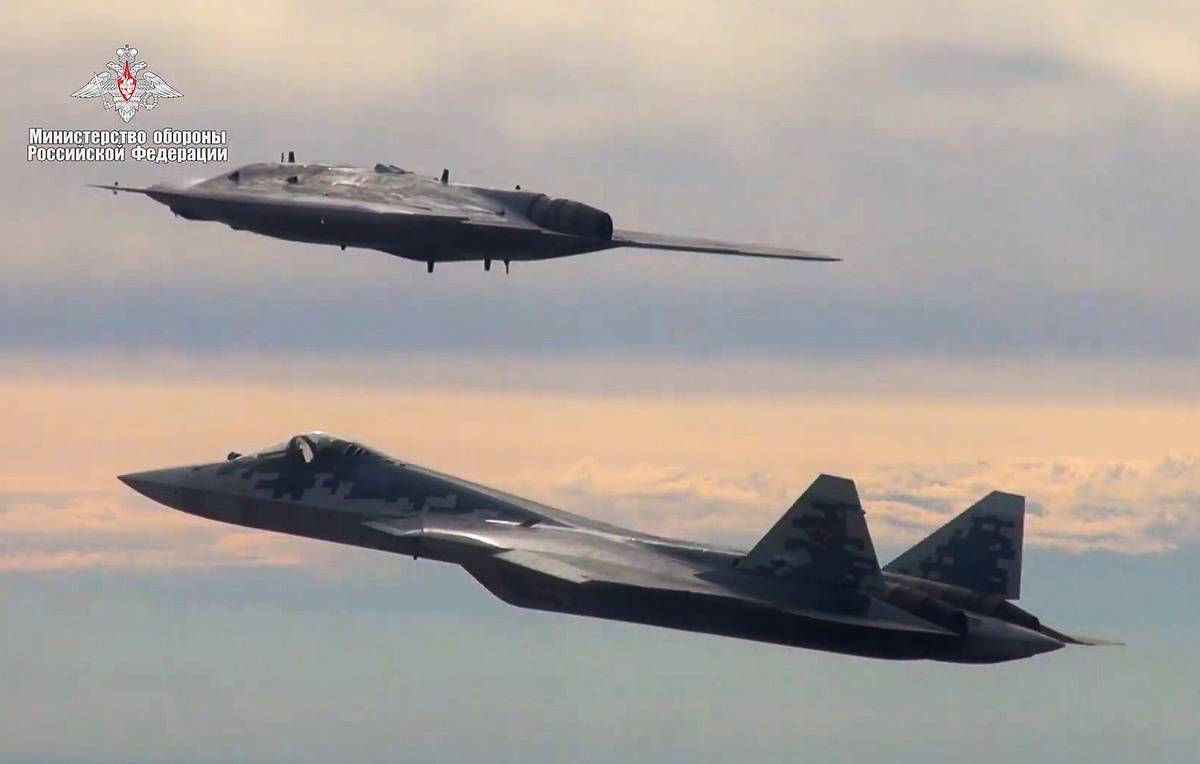 Judging by today's Zvezda TV report of Sergei Shoigu's inspection of the Far Eastern shipyards, the shipbuilding program is being kicked in the high gear, as is production of combat aircraft being expanded. Substantially. In the end, do not be surprised if we will learn that full displacement of the project 23900 Amphibious Assault Ships will turn out to be around 35,000 tons, which is way above Izumo-class Japanese carriers capable of carrying more than 12 STOVL F-35B. Oh, boy, am I getting into the dangerous territory of STOVL and UAV carriers?

Let us recall the event which took place exactly 2 years ago. Here it is (in Russian): Vice-premier Yuri Borisov: in accordance to the order of President of Russia a brand new STOVL combat aircraft is being developed in Russia. The length of design and putting aircraft into series production is between 7 and 10 years. The work on Russian STOVL started in 2017. Well, 2017+7=2024, 2017+10=2027, precisely the years when both ships of project 23900 will be commissioned. Well, give and take, of course. I am intrigued.

Now, if anyone doubts that, apart from extremely capable strike UAVs, Russia will be able to develop a state-of-the-art STOVL aircraft, think again and recall the story of Yak-141 (NATO: Freestyle) which really re-defined STOVL aircraft design. In fact, that aircraft was revolutionary and many ideas (and technologies) realized in it have been incorporated into F-35B. Russians are creating a completely new STOVL aircraft from scratch. This also explains the growth in displacement (and redesign) of the pr. 23900 LHDs, which, in the end, may become simply universal aircraft carriers capable to do it all. I wonder why Russia's MOD today proposed to limit propagation of the military-industrial information which does not constitute state secret, but is sensitive, to still be counted as "confidential" (in Russian). Something is certainly up and we all know that Russia's economy "is the size of Texas economy", wink-wink;))
Posted by smoothiex12 at 2:22 PM