Whenever I stumble onto any "education rating" produced in the West I smile, ironically. Just look at this "ranking" for the fun of it. Good luck finding any Russia's university in the Top 100. Never mind the fact that "achievements", as an example, of #27, London School of Economics and Political Science, in advancing a wholesale ignorance of Western "elites" will take decades to address. But then again, meaning of education in Russia and in the West differ dramatically. And here is the proof. 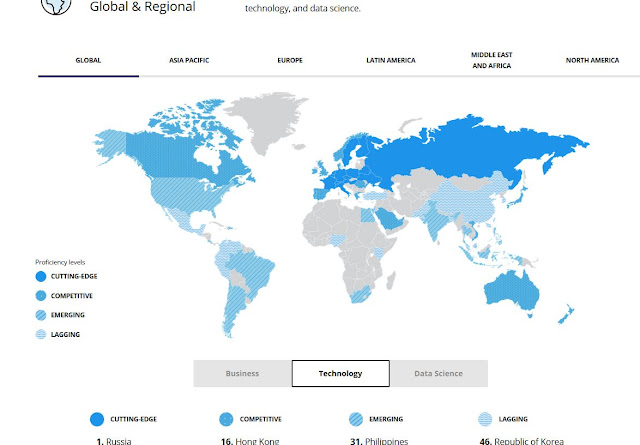 Here is the map of global competence in the programming and, by default, mathematics field. Here is a part related to technology, in terms of Data Science, Russia also leads the field of Cutting Edge, never mind other, less advanced, fields. You may ask, but how this could be, when there are no a single Russia's university in Top 100 in all those rankings. Agree, there are none. Russian universities and military academies do not teach tolerance, social justice and do not have programs on gender-studies. Most Western students taking entrance exams in mathematics and physics to any good Russia's STEM school of higher learning will not pass them. Large portions of required knowledge for math, physics and chemistry with other natural sciences are simply not taught in the West, and elsewhere where Bologna Process is followed and education is modeled after American K-12 and higher ones.

Yet, somehow those backward Russians top the world of cutting edge IT and programming, same as the world of radar, signal processing, network centricity, and are direct and ONLY competitors to US Military-Industrial Complex. I would dare to state that a very successful competitor. Recall, ladies and gentlemen, as it is written in plain English in my first book, couple of chapters in fact are dedicated to it, that already by 1960 average Soviet high school graduate received three times more instructions in math, physics, biology than it was stipulated for the entrance to Massachusetts Institute of Technology (MIT). Things didn't change since, in fact, what passes for mathematics and general "science" being "taught" in American schools today is pathetic, it is a third world level of "education" which, inevitably, translates into atrociously small numbers of American kids deciding to go into STEM fields in universities, not to mention the fact that those who go there, they start with a dramatically lower level than their Russian counterparts in those backward and low-rated Russia's universities.

I guess that explains why, then, Russia leads the world and by a huge margin in nuclear energy, cutting edge weapon systems, continues to dominate piloted space flight, why she builds her own satellite constellations, commercial aircraft, top notch jet engines and super-computers. It is all because they teach mathematics and physics (and chemistry, I hate chemistry) in Russian public schools the way it is supposed to be taught. Hence, the results I presented here, but I write about this matter for years. Just to give you example. here is one of Russia school math teacher's way of introducing 7th or 8th grade kids to factoring  (squares of the sum and difference and operations with algebraic fractions). The end result of this simple problem is what comes down, when is factored properly, to I Love/You in Russian. 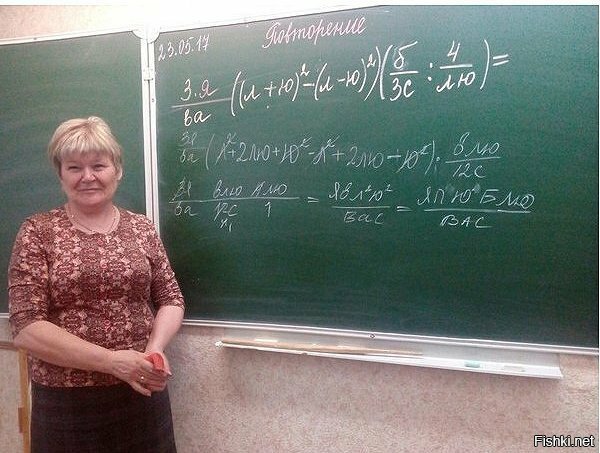 I guess this is one of a good ways for introduction to factoring. It is also the only way to maintain national intellect in the top notch form--by challenging kids by means of serious and systemic math-physics-chemistry curriculum which develops proper synapses which, in the end, translate into new cutting edge technologies, ranging from space exploration to hyper-sonic weapons. It is also the only way to grow and educate real national elite, which is creme de la creme of nation's brightest and most capable, in numbers sufficient to feel oneself independent and free.
Posted by smoothiex12 at 11:01 AM