Two days ago The Guardian posted the article about a very dear and respected by me man. At my time in 1980s, a superintendent of my naval academy, Vasili Alexandrovich Arkhipov. When I started my naval military exploits in 1980 he was a rear-admiral, later, in 1981 he was promoted to the vice-admiral and, of course, we all knew his story. I had an honor to know, as many our naval cadets and officers, him personally and serve aKVVMKU--my years. nd study under his outstanding command.

“The Future of Life award is a prize awarded for a heroic act that has greatly benefited humankind, done despite personal risk and without being rewarded at the time,” said Max Tegmark, professor of physics at MIT and leader of the Future of Life Institute. “The lesson from this is that a guy called Vasili Arkhipov saved the world,’’ Thomas Blanton, director of the National Security Archive at George Washington University, told the Boston Globe in 2002, following a conference in which the details of the situation were explored.

It couldn't have been awarded, however posthumously, to a better man than Admiral Arkhipov. Some photos of Vasili Alexandrovich. 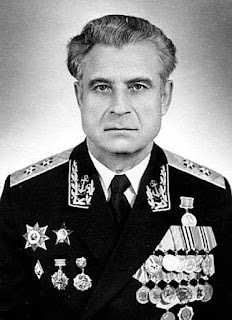 KVVMKU--my years. Many my class-mates from class of 1985 here. Of course, most interesting things are not in this video, as you may expect (in English).

Vasili Alexandrovich is also in this video.
Posted by smoothiex12 at 9:55 AM