We already touched upon very basic calculations of Sweep Widths and Rates to give at least some impression about the scale of the tasks ASW faces when operating in the area such as Russia's Far East. Of course, search in general and ASW's in particular realities and math involved are more complex than that, including such funny things as Probability Density Distributions and Probability Maps, which reflect, if to put it in layman's lingo, those areas (often represented as cells on a grid) where the probability of the target is lowest and highest.  The formula used there is not a complex one (unlike a general math concept, which requires a little bit of time to get acquainted with) and it looks like that:

Where in red, obviously, is Probability Density, POA is a probability of the target we search for being contained in some area (it is also goes under POC abbreviation), while A is the size of this area. Not a difficult stuff, really, but if some of you want to ask the question of how the hell has this anything to do with Elmo Zumwalt, the answer is this: as the story goes by some people who had a first hand experience with ASW--it is so complex that it reminds many the story of a man who constantly hit himself on the head with a hammer in order to feel good when he stopped doping this. This is ASW in a nutshell. US Navy's CBGs thought (and still think--hence this series of posts in response to Admiral Richardson's claims) that their organic ASW capabilities (remember those ungainly but crucial S-3 Viking planes?) combined with those of patrol aviation (P-3 Orion then) could provide the safety of carriers. Famous Soviet Foreign Military Review magazine published in mid-1970s the article (by Rear-Admiral Pushkin and Professor Naskanov) with a straight forward title: Anti-Submarine Defense Of Carrier Group. It was a fairly detailed review of the open information on the subject and it had a number of schemes of deployment of CBGs' organic ASW forces. Such as this: 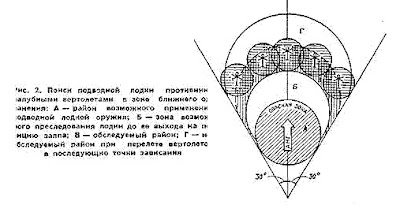 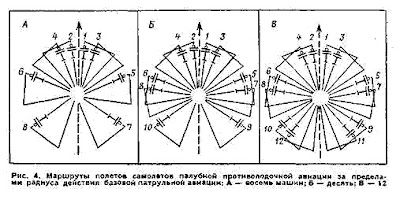 Which was pretty generic tactical (and operational) mambo-jumbo, but in the end of this article both authors noted that complexity of technology (mid-1970s, mind you), physiological and psychological loads on ASW crews, other objective factors limited realization of all supposed advantages to... drum roll ...20% of actual capability. There went, through the window, the myth of CBGs' invulnerability. Zumwalt knew that. No, of course, he would continue to extol the value of carriers as a main platform for US Navy but he and a number of his Navy allies, such as Admiral Stansfield Turner, looked at the emerging Soviet Navy's capabilities really seriously--thus the Project 60 was born.  After all, it was THIS Admiral who made it to the cover of the Time Magazine in 1968. 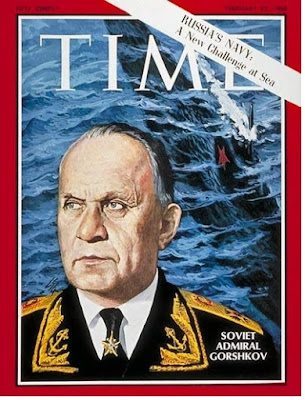 And this Admiral loved his submarines and ASMs. In fact, it was the only way to stop US Navy's CBGs since, as Baer succinctly points out: far from being a platform which can fight for Sea Control, US Navy's carriers themselves depended on it and that meant only one thing--someone else was supposed to fight those nasty Russkies who increasingly were prone to reducing their Probability Densities and were working really hard at noise and other physical fields' reduction technologies. This is, mind you, without mentioning Gorshkov's battle axe of Naval Missile-Carrying Aviation which was specifically honed for sinking carriers, using a variety of means, not least of which were, and you may have guessed it, air-launched anti-ship missiles. But back to the underwater start.

P-120 Malakhit (NATO SS-N-9 Siren)  already had a serious impact with its range. Indeed, what were the probabilities of the CBG, with its immensely expensive and mission-crucial carrier in the middle, to defend against the salvo of 2, 4 or maybe 8 of such missiles? Crisis in Mediterranean in 1973 showed that what Soviet Navy cared about was, as Admiral Kapitanetz later recited, "how many missiles we had in the first salvo". The operational concept of having a missile revolver at the temple (carrier) of each US Navy's CBG had its own flaws, to be sure, people and ships (also known, and for a good reason, as kamikaze) would die but then again--the game in those days was too damn serious. Project 60, which was a US Navy's internal document, was seeking to withdraw carriers into the second echelon for pure power projection, that is only when the battle for Sea Control will be won against Soviet Navy and that meant a massive ASW campaign both in Atlantic and on the Pacific theaters. The centerpiece (or rather four of them) of Project 60 was a ship which would give any US navy's aviator an aneurysm--Sea Control Ship. This was a blasphemy, a sacrilege, really (for US Navy's "aviators union") to have a relatively inexpensive ($100 million--compare with $1.44 billion for nuclear carrier then)  ASW and escort missions capable ships whose task was, actually, to fight Soviet Navy and its subs. Look above, at the first picture where it is namely a helicopter ASW sweep ahead of CBG which was tasked with immediate safety of a carrier. This was the same concept, except that this time, those helicopters would fly from a ship which was almost 15 times less expensive than carrier and whose loss wouldn't entail a massive escalation and a political and psychological crises in the US. Seems reasonable, after all--the second Project 60 key item, a venerable FFGs of Oliver Hazard Perry-class reached unheard of number built--71 (!!!) and I guess that was because these were ... excellent (in reality outstanding) and inexpensive multi-purpose ships?  They sure as hell fell into Arleigh Burke's paradigm handed by him to Zumwalt:"We need numbers"(c). They also proved very survivable, granted that the crew was properly trained. But if Project 60 was able to push through those ships, Sea Control Ships were an absolute no-no. Guess why? I am sure you already have guessed. There was a problem, though--with ASM salvo a defending unit (CBG) is limited by the radio-horizon--this is as far as CBG can theoretically detect and track incoming ASMs (we will touch on this later). So, the best way to defend against this salvo is not to allow this salvo to happen, to not allow this salvo to happen one had to:

If the carrier of those ASMs was some TU-22 or TU-95 US Navy theoretically had the answer--F-14 Tomcat and AIM-54 Phoenix, which allegedly could also shoot the incoming  ASMs. The real tasks of  Tomcats, however, was to shoot down primarily carriers of those ASMs. Theoretically some measures could be taken against Soviet surface kamikazes keeping cross-hairs of their ASMs on US carriers--a practice called tracking with the weapons (slezhenie oruzhiem). In the end, those kamikazes were on the surface, they could be tracked visually and by radar, so there were some chances. But submarines--this was a completely different game. And the only answer was a massive and extremely well-coordinated ASW effort with probabilities which would be at least satisfactory for US Navy's carriers to carry out their force projection tasks. Well, I am about to make a statement which some will not like: once the anti-shipping missiles learned how to launch from underneath the surface of water, those probabilities were never in this "satisfactory" range. And, indeed, what is this satisfactory range? I would say, for CBG's safety it has to be in the vicinity of 0.85-0.9 under the most adverse (combat) conditions. The problem, however, was that against near-peer, let alone against peer achieving such numbers was simply horrendously difficult. Today, it is absolutely impossible, because those very near peers and peers spent decades developing means of.... making Elmo Zumwalt and Project 60 correct--that modern US CVNs can not realistically fight for Sea Control and survive, totally different classes of ships are required and I don't mean LCS.