Everybody Was Kung Fu Fighting....

OK, people, this is getting ridiculous. French MP wants mandatory martial arts classes in schools following terrorist attacks. Are these people for real?  Make no mistake, I am all for martial arts. I spent years being trained by some very impressive martial artists, starting from Kyokushinkai (by my friend, 3rd Dan) and eventually moving to "softer" styles of Kung Fu. And I am talking about full contact and grueling training sessions, not some BS for teenagers. My kimono was dirty and bloody, some spots never washed away. My, fairly limited, skills did come handy couple of times but never in my mind would I think that I could use those in the situation with terrorism. In the end, my very close friends, who trained number of special units of KGB and MVD would never even think about instructing fighters of those units to drop their AK-74s (or AKSU) in a face of armed and determined enemy. A really great martial arts skills which can make a difference are a realm for a relatively narrow strata among attendees of all kinds of martial arts groups and overwhelming majority of those attendees do it mostly for psychological self-assurance, while never getting serious skills which would allow them to effectively defend themselves. Those skills come through a lot (and I mean a lot) of pain and blood. And here are some things which all those Europeans may (but will not) take as a lesson from USSR/Russia.

Instead of imposing mostly useless exercise in futility, how about looking at this: 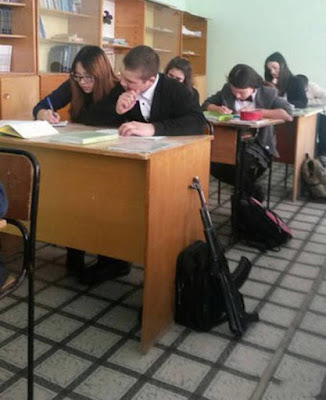 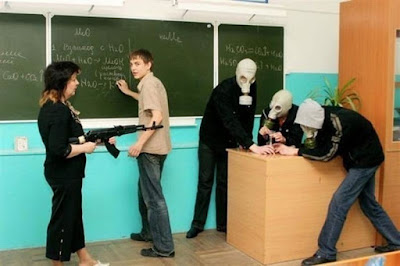 These are not fake, albeit on the second photo I would have really kicked the ass of the teacher for pointing, even if unloaded and disabled, AK towards students. Let me explain why those are not fake--because in my time it also was absolutely normal to come to the lesson on physics or geography with AKM (later AK-74) if we would have some exercises in the course of NVP (Nachalnaya Voennaya Podgotovka--Basic Military Training) after this lesson. These photos are most likely from Belarus or Kazakhstan where the subject of NVP not never was cancelled (unlike it was in Russia) but thrives and rightly so. I, as well as very many of my peers in USSR knew how to assemble-disassemble AK as early as 5-6th grade,  we learned about basic tactics in offense and defense (squad-platoon), by 10th grade we would be on the nearest military unit's firing range firing real live ammo from Kalashnikovs--these were and are real requirements for the graduate of the high schools. Russia is also re-introducing NVP in its schools. And here is an advice to this Euro-morons--get your kids trained in basic weapons, in how to react to terrorists and terrorist acts, how to profile, how to avoid being hurt in stressful situations, how to develop a cohesion in a class during an attack, how to move. Yes, I know, all this is a wishful thinking--no European nation will implement this, because everything is fine, everything is peachy and shooting, decapitating, stabbing, blowing people up or executing them because they are infidels is not a war, no--it is just a cultural enrichment and it has to be gladly accepted. Exercising an idea that a boy is on his way to becoming a man and that any man must have basic weapons and tactics skills is so not metro-sexual, is so not tolerant, is so not-Euro.......But still....it is all fun and games.