A “miscalculation” in the cat and mouse game with Russia could lead to full blown war, the head of the Armed Forces has warned, after a tense confrontation in the Black Sea this week. General Sir Nick Carter, the chief of the defence staff, said the risk of an “unwarranted escalation” involving Britain was “the thing that keeps me awake in bed at night”. There was a standoff between Britain and Russia when a Royal Navy destroyer passed through a contested part of the Black Sea on Wednesday. Russia considers the waters to be its own after the annexation of Crimea in 2014, but it is recognised by Britain as sovereign Ukrainian territory. HMS Defender provoked Russian forces into firing warning shots and dropping four bombs close to the ship, according to the Russian defence ministry, but this claim is disputed by Downing Street.

After that Carter elaborated on the advantages Russia (and China) have when compared to combined West. Russia's MoD and its very own Igor Konashenkov, responding to John Kirby's "comments" nonchalantly stated obvious:

Translation: (Konashenkov) underscored that for Kirby, a former rear-admiral, who called the incident in the Black Sea a disinformation it should be well known that for Russian Armed Forces defending Crimea HMS Defender is nothing more than a fat target in any part of the Black Sea for Russia's anti-shipping missiles.

Kirby, who launched his naval career as SuWa (Surface Warfare) officer, should know how detection, tracking and targeting are done by Russians and what are saturation thresholds of all NATO AD complexes against all types of missiles deployed by Russians. He also should know what it means "tracking by weapon" (Слежение Оружием) and how salvos are formed. So, it is all so cute when people try to deny obvious, thus exposing themselves as guilty and weak party.

In related news, as I predicted for years, Russia started to deploy MiG-31Ks with Kinzhals to Syria and now conducts patrols over Mediterranean (in Russian). To give some idea what it all means--Kinzhal has a range of 2,000 kilometers (with the range of carrier-around 3,000 kilometers) at M=9+ velocity and maneuvers at terminal, making it impossible to intercept by any combination of existing AD means at NATO's disposal. To give an idea what it all means, here is some illustration. 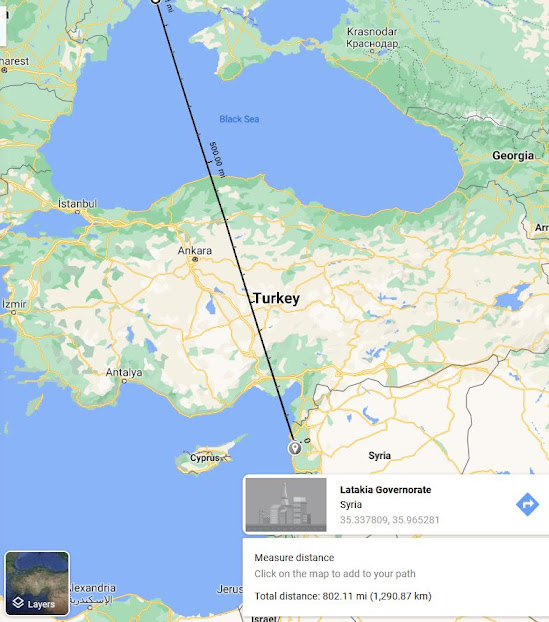 Any Kinzhal launched from Latakia's airspace will reach a target in the Black Sea in about 5-7 minutes, while launched from the vicinity of Rostov even faster. When even Deputy Foreign Minister Ryabkov (forget Shoigu) states that " we are going to "bomb" them", one should take a note.  And yes, there is no "cat and mouse" game, because targeting any NATO asset is continuous and is in real time. Guys, this is not 1980s, this is 2021 and Russians are really good at sensor fusion plus whatever they have in space, and they have a lot. So, the forms have been obeyed and Kirby should know well that right now Russian Navy's task group sails in the vicinity of Hawaii (strictly in the international waters, mind you) and who knows how many 3M14s are currently loaded in VLS of what is on the surface, but more importantly--what is under it.
smoothiex12 at 12:15 PM
Share