I still don't understand why France's political and pseudo-intellectual elites think and are assured in their thinking that they are "irresistibly attractive" to Russia but they, evidently, are self-assured. Why, because they think that Russia owes them something. Hm, really?

Translation: Moscow, 31 October, Ria. France's embassy in Russia is deeply concerned with the threats against the republic as they informed Russian authorities and called on them to officially condemn those.

There was a group of Russian Muslims, I don't know 30-40 men, which held a protest at French embassy in Moscow regarding this whole business with Mohamed's caricatures and decapitation of the teacher, Moscow police observed them for a short time and then dispersed them. Big fvcking deal. What is happening inside France is France's internal affair and let France deal with her own problems. I may remind French diplomats St. Petersburg's terrorist act of April, 2017. Let's see, as Kathy Hopkins describes it, France, it is about you:

Only after public outcry did Paris do something (turned lights off, I recall) with Eiffel Tower. By then it didn't matter. As Hopkins points out and overwhelming majority of Russian know it:

After Westminster we 'stood united', we 'were not cowed' and we would 'carry on'. Our leaders (such as they are) spoke of the bravery of the victims, the swift response of the emergency services; we heard from the families of the victims, who held no grudge against the attacker. The Eiffel Tower was plunged into darkness. Merkel said she stood with Britain. The hashtag #prayforLondon and #WeStandUnited trended around the globe. This is our terror-response template, to which we are encouraged to conform when we need to self-soothe. But, it is now clear, it is not universal. It is not extended to all. It is not extended to Putin's Russia.

France supported throughout the years all kinds of jihadists all over the world from Syria to Russia. In fact, as I state non-stop, France gave shelter to Chechen terrorists whose hands were covered in blood of Russia's servicemen and civilians, from pregnant women to children. France continues to play a decisive role in destabilizing Syria, French native population is being diluted by non-stop stream of people who are incompatible with the values of France and the process is long time out of control. France supported Chechen separatism, so it is really simple--what goes around, comes around. I can only remind French diplomats what their Russian colleague Sergei Lavrov stated couple of weeks ago:

Those people in the West who are responsible for foreign policy and do not understand the necessity of mutually respectable conversation--well, we must simply stop for a while communicate with them. Especially since Ursula von der Leyen states that geopolitical partnership with current Russia's leadership is impossible. If this is the way they want it, so be it.

I don't understand what's so complicated with all that? Russia owes nothing to anyone. Want to deal with Russia and have Russia's support--be nice and take a number. I do feel for average French people but it is what it is--they voted for those who are in power, so it is a moot point. Plus, French on average do not consider Russians a European people and, finally, Russians arrived to the same conclusion. Considering who French "elites" largely are and where they came from, I don't think there is any future for Russian-French relations in any serious sense. Economics, you know, some trade, sure. Other than that, they want Russians? How about cleaning Paris from dirt, crime, rats and maybe using some air freshener for it not to stink with urine. That could be a good start, including dropping a pretense and self-assurance in own attractiveness and looking at the reality of Western Europe in general, and French motherland in particular.

One comment under the Russian song Those Were the Days reads:

I don't think so. Too little, too late--Russia's plans are Eurasian in essence and scale, Europe in general, and France in particular, can remain in their belief in own attractiveness. I liked this meme: 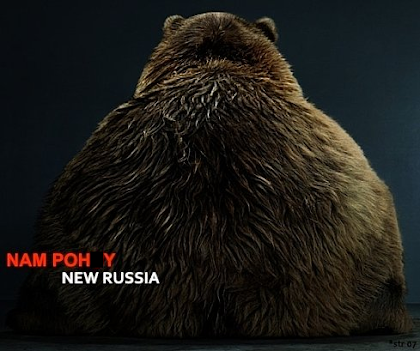 Transliterated phrase means: we don't give a fuck. They better learn to live with this reality in Europe.