Or, ouch, that's gotta hurt. What is permissible for Jupiter may not be permissible for a bull(c). It is also known as a pecking order or, as Russian naval truism goes, the only thing scarier than the nuclear war is a lose cannon sea-bass. Sea-bass, of course, being the term for a novice, first year, enlisted sailor who still doesn't understand how combat ship works and what is his place in it and disrespects the authority of seniors. Lithuania, evidently, thought that it can play in the same league as China.

FRANKFURT/VILNIUS, Dec 9 (Reuters) - China has told multinationals to sever ties with Lithuania or face being shut out of the Chinese market, a senior government official and an industry body told Reuters, dragging companies into a dispute between the Baltic state and Beijing. China downgraded its diplomatic ties with Lithuania last month, after the opening of a representative office by Taiwan in Vilnius. Lithuania's ruling coalition had agreed in November last year to support what it described as "those fighting for freedom" in Taiwan, putting its relations with China at risk.

They, obviously, bought completely into this propaganda BS about "democratic" West and being paupers and beggars with no serious real self-sustaining economy, the only thing they can sell is their loyalty to big master and that means spewing Russophobic BS and trying to please the owners by irritating China. Obviously, now that China started to introduce some measures, as is expected:

Lithuania has also appealed to the European Commission for support. In a letter sent earlier this week to top officials at the Commission and seen by Reuters, Lithuanian foreign minister Gabrielius Landsbergis asked for support in rebuffing China. "A strong reaction is necessary at the EU level in order to send a signal to China that politically motivated economic pressure is unacceptable and will not be tolerated," the letter said.

LOL, I like politically motivated pressure thing. Russians got their pop-corn and are sitting in anticipation of a good show. To understand why Russians call three Baltic States Vymirates (Вымираты--analogy to Emirates), which is a combination of the words to die out and emirates, one can take a look at that: 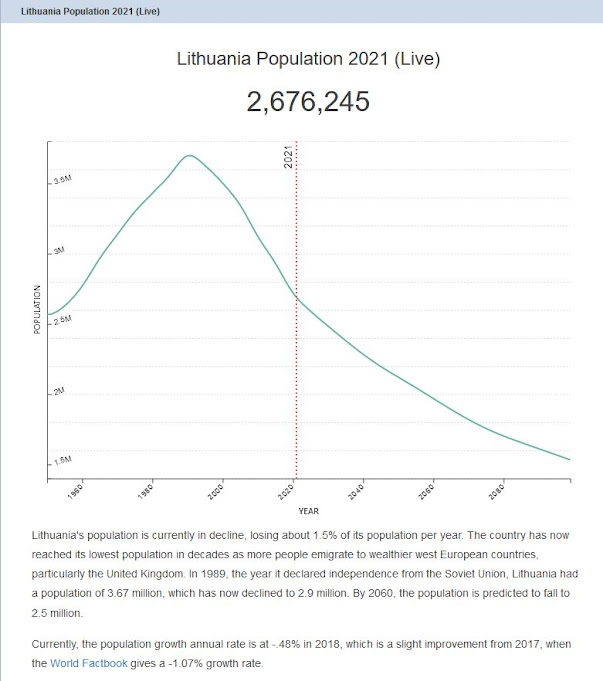 As you can see yourself, this mighty country with declining population, and which lives in large part on handouts from EU thinks that it can play in the same league as China. Obviously, it can't but, hey, eventually woke EU politics and economism will get to them too (actually, already) and considering the speed of Lithuania's depopulation, who knows, this territory may become of interest for Poland and Russia at some point of time in the future. You see, there will be no Soviet communists caring about preservation of Lithuanians. Russians don't care. Neither do Chinese, and they may not exhibit sympathy to those who cross therm. Especially when dealing with a pipsqueak of a nation. Quod licet Iovi, non licet bovi.
smoothiex12 at 3:56 PM
Share