You Cannot Help Them, Or Captains Obvious.

When I write about US crisis I constantly stress that it is systemic and it is institutional. Very few American institutes are as tragicomical and popular as being butts of the jokes around the world than the so called America's "Intelligence Community". It's failures to assess or to predict anything are so spectacular, that one must question a validity of their "analytical" methodology. To illustrate this, it is enough to take a look at a comment to a release in 2012 by the Office of the Director of National Intelligence Global Trends Projections 2030.

Report projects U.S. as "first among equals," but the "unipolar moment" is over.

Well, here we are in the year of 2021, 9 years before the end date of these "projections", and, boy, are we in for a surprise. I am not talking about "unipolar moment" which was over in 2007 after Putin's Munich Speech and wiping the floor with the US client of post-Soviet country of Georgia in the five day war in 2008. That it was over was clear already then. No, I am talking the "first among equals". There is a lot of wrong with statement, because seeing the size of America's real economy today, and yes, I am talking about actual manufacturing, one is forced to concede that American economy is nowhere near the Chinese one and continues to deindustrialize at accelerated rate. Yes, my brand new refrigerator is made in Mexico, the new stove is made in China, and pretty much any consumer good sold today inside the US is NOT made in America. And these are consumer goods only, there are other goods and resources which have non-US origin and are critical for what remains of the US productive economy. Be that China's rare earth elements, Russia's titanium for US aerospace, or many other things and the list is long.

So, no, the US is not "first among equals" since China dwarfs the United States economically, while Russia neutralized most of US military capabilities by making systems which the United States simply can not and it is doubtful will be able to close ever-increasing military-technological gap with Russia both in enablers and weapons which shape modern geopolitics. No doubt, this year, yet another Captain Obvious "assessment", on Threats to the US no less, has been produced with an "intelligence insight" of such a profundity that one really begins to scratch the head.

Moscow will continue to employ a variety of tactics this year meant to undermine US influence, develop new international norms and partnerships, divide Western countries and weaken Western alliances, and demonstrate Russia’s ability to shape global events as a major player in a new multipolar international order. Russia will continue to develop its military, nuclear, space, cyber, and intelligence capabilities, while actively engaging abroad and leveraging its energy resources, to advance its agenda and undermine the United States.We expect Moscow to seek opportunities for pragmatic cooperation with Washington on its own terms, and we assess that Russia does not want a direct conflict with US forces

If this is the "level" of "intelligence" assessments, I need to call on Mr. Lavrov. 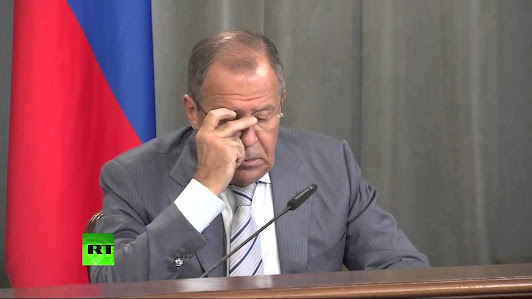 Neither USSR, nor Russia in post WW II time ever wanted "a direct conflict" with "US Forces", which wouldn't be able to survive it to start with, but tried to avoid escalation towards conflict knowing simply way more about real war and how it looks like than any US policy-maker or general. Truth is, in terms of "undermining" US influence, the United States does a swell job itself. In fact, Russia couldn't even dream about undermining the US influence with such incredible efficiency than the US does on its own. Posting trite obvious facts or, on the other hand, elaborate, but easily debunked, lies by the so called US intelligence community IS the part of this undermining and if anyone wanted to see a complete dysfunction and a monstrous BS-producing machine, one doesn't need to look further than Trump's Presidency and Elections 2020.

Of course, no one should expect any public domain assessments even from the top notch analytical orgs to be perfect. One will always find inconsistencies and, sometimes, obvious half-truths, but in the American case it is an absolutely defining feature of exposing oneself as simply ignorant on the culture and intentions of those who the United States counts as enemies. American enemies are those who are better at things America thinks they cannot be. Well, that's exceptionalism for you. But the US National Intelligence Council, certainly, thinks that it is smarter than  anybody else and does this:

WASHINGTON, D.C. – The National Intelligence Council (NIC) today released the seventh edition of its quadrennial Global Trends report. Global Trends 2040: A More Contested World is an unclassified assessment of the forces and dynamics that the NIC anticipates are likely to shape the national security environment over the next 20 years. Global Trends 2040 identifies four structural forces that will shape the future – demographics, the environment, economics, and technology – and assesses how they affect decisions and outcomes. It further describes five potential scenarios for the world in 2040, based on different combinations of the structural forces, emerging dynamics, and key uncertainties. It ends with a series of graphics displaying key demographic trends in nine geographic regions.

Oh, boy, economics and technology are "identified" as "likely to shape the national security environment". In related news, water is wet, wind blows and the sky is blue. But never mind, these two factors have been decisive factors in anything for much longer than the United States exists, good that somebody noticed now. I will omit here commenting on important but grossly de-scientified in the West issue of environmental change and, correctly assuming, the level of wokeness and social and cultural insanity affecting ALL US institutions today, I will leave this important issue outside of this discussion. For now. So, here is this latest Global Trends 2040. The opening salvo is devastating in one of the four scenarios of the future:

RENAISSANCE OF DEMOCRACIES: The world is in the midst of a resurgence of open democracies led by the United States and its allies. Rapid technological advancements fostered by public-private partnerships in the United States and other democratic societies are transforming the global economy, raising incomes, and improving the quality of life for millions around the globe. In contrast, years of increasing societal controls and monitoring in China and Russia have stifled innovation.

I believe this scenario was written by the same people who shot CIA recruitment videos and people who graduated "economics" programs in Ivy League schools and know Modern Monetary Theory. Of course, you will not find anywhere in this assessment how to reindustrialize the United States and concentrate resources on real innovations, other than discovering new genders and fields of "study" such as Queer studies or Constructing the Grievance Industry. Of course after this wowser they go for the favorite term in the US military-intelligence-media complex: disruptions and disruptors, meaning anything that "undermines international order", that is disappearing US, primarily self-proclaimed, hegemony.

The world is fragmented into several economic and security blocs of varying size and strength, centered on the United States, China, the EU, Russia, and a few region-al powers, and focused on self-sufficiency, resiliency, and defense. Information flows within separate cyber-sovereign enclaves, supply chains are reoriented, and international trade is disrupted. Vulnerable developing countries are caught in the middle

Actually, "Vulnerable developing countries" in Eurasia will be doing just fine and will feel very safe from being bombed by "democratic", if not queer, stand-off weapons and have their regime changed. Being caught in the middle is not such a bad proposition after seeing how successful "democratization" by the US went in Iraq, Afghanistan and other places. But then they suddenly come to a sensible conclusion, surprise!

Material Power. Military capabilities and economic size will remain the foundation of state capacity and power projection, compel-ling other countries to take a state’s interests and policies into account. These two areas of power allow states to maintain their security and to amass resources that enable other elements of power.

In related news, water is wet, the sky is blue...well, you know the routine. And then comes the BANG!

Other major powers, including Russia, the EU, Japan, the United Kingdom, and potentially India, could have more maneuvering room to exercise influence during the next two decades, and they are likely to be consequential in shaping geopolitical and economic outcomes as well as evolving norms and rules.Russia is likely to remain a disruptive power for much or all of the next two decades even as its material capabilities decline relative to other major players. Russia’s advantages, including a sizeable conventional military, weapons of mass destruction, energy and mineral resources, an expansive geography, and a willingness to use force overseas, will enable it to continue playing the role of spoiler and power broker in the post-Soviet space, and at times farther afield. Moscow most likely will continue trying to amplify divisions in the West and to build relationships in Africa, across the Middle East, and elsewhere. Russia probably will look for economic opportunity and to establish a dominant military position in the Arc-tic as more countries step up their presence in the region. However, with a poor investment  climate, high reliance on commodities with potentially volatile prices, and a small economy—projected to be approximately 2 percent of global gross domestic product (GDP) for the next two decades—Russia may struggle to project and maintain influence globally. President Vladimir Putin’s departure from power, either at the end of his current term in 2024 or later, could more quickly erode Russia’s geopolitical position, especially if internal instability ensues. Similarly, a decrease in Europe’s energy dependence on Russia, either through renewables or diversifying to other gas suppliers, would undercut the Kremlin’s revenue generation and overall capacity, especially if those decreases could not be offset with exports to customers in Asia.

My beef here is not with BS written about Russia--by now, there are no real professional Russoists in US "intelligence community" (speaking Russian doesn't make one a "specialist in Russia") and one should expect such idiocy, plus always consider a severe butt-hurt factor when speaking about Russia to American exceptionalists--they are still pissed off  with Russia defeating Hitler, flying first to space, having better education system, superior weapons and military history and now fast closing the gap in terms of living standard. No, you would expect that. My beef is with the bunch of morons who consider the UK a "major power". Really? How, can anyone explain it to me? Country devoid of any serious natural resources, with economy consisting primarily of FIRE, with no independent aerospace industry capable out of own resources to produce a basic commercial let alone combat aircraft, having no space program, drowning in the cesspool of multiculturalism and insidious Islamization, having a PM who is a certified idiot and being on the verge of disintegration, with Scots having a different views on the UK altogether. And yes, UK has a lone operational destroyer and her two carriers deploy a terrifying weapon--F-35B which is a...well, flies not that well, to put it mildly.

But that doesn't prevent this "Intelligence Council" from publishing an absolutely risible, and traditionally wrong, yet another pack of BS which is filled with catch phrases and buzzwords of increasingly detached from the reality and grossly ideological American discourse in any serious professional field ranging from politics to war, to intelligence or the so called "diplomacy". If you wanted to see how decreasing intellect and professionalism manifest themselves in a society which does not produce anything but wet dreams--read this document. You cannot help them, that is how they were brought up--to be ignorant.