On the Ukrainian SU-27 Crash.

But before I proceed with this sad occasion, I want to direct attention to the latest from Gilbert Doctorow who passes in US as Russia "expert" and who in his latest piece Propaganda and Posturing From All Sides... tries to pretend that he is somehow "objective" (quotation marks are intentional). In his piece we find this interesting statement:

Over the past couple of years, Russian state television has daily disseminated the view that Ukraine is one step away from economic and political collapse. This is patently untrue.

Here is a photo of Lt. Col. Seth “Jethro” Nehring, a fighter pilot with the California Air National Guard’s 194th Fighter Squadron who was killed in Ukrainian SU-27UB crash on October 16th while flying with Ukrainian officer under the auspices of "Clear Skies" exercises. 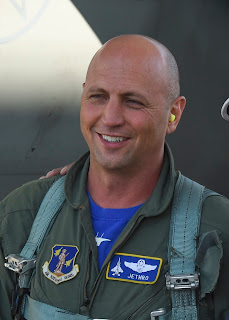 It is always sad to see young life (only 44 years old) gone, even when one considers that these "exercises" had zero military value but were only to demonstrate NATO "support" for Ukraine in her existential struggle with Russia, which, as we all know, loses in Ukraine a division or two every single day. But let us continue. Here is a photo of an Ukrainian pilot with whom Lt.Colonel Nehring flew that day. 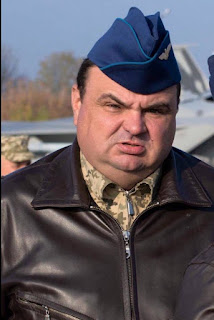 This is Ukrainian Colonel Ivan Petrenko (known for bombing civilians in Donbass before LDNR, well, Russia grounded Ukrainian Air Force completely). As you can see from his face, not touched by intellect, this "pilot" was morbidly obese--a first no-no for anyone getting into the cockpit of the fighter jet. But let's move even further, the SU-27UB these two pilots were flying that day. Well, here is the data: board number 963104240 SU-27 UB was built in 1991 and since then this aircraft, which was in and out conservation a few times, get this--NEVER undergone any repairs. The only thing which was done to this 27 year old aircraft--it was repainted. Do I need to go any further in explaining what was going on? Apart from inevitable issue of US still not understanding what they got herself into in Ukraine. Another interesting note: as one of the former Ukrainian Rada MP's (Kilinkarov) stated, the US was not really trying to fly "Russian" technology against ancient Ukrainian S-300P, albeit this too was secondary objective. The main one was to study psychology of Russian pilots since Ukrainian military, in American mind, is very close psychologically to Russian one.

I have some news for those "bright" minds in US who came to this idiotic conclusion. Putting obvious serious national psychological differences between Russians and what today passes as Ukrainian nation apart, thinking that there is a viable technological, tactical and operational similarity between Russia's state-of-the-art Air Force and esprit de corps which exists there, as Major Filipov's act of unprecedented heroism has demonstrated, and a junkyard, demoralized, utterly corrupt Ukrainian military, have to be done by absolute cretins. And here we come to Doctorow's "insight". Well, apart from the fact that leading Russian specialist in Ukraine Rostislav Ishenko would destroy Doctorow's statement in under ten minutes, and Ishenko knows Ukraine on several orders of magnitude more than Doctorow ever will, apart from objective factors of economic decay across the board in Ukraine, not to mention internal political dynamics, I have to point Mr. Doctorow's attention to the fact that Ukrainian military was capable to "exercise" with the representative of worshiped in Kiev US military in 27 year old un-repaired junk of an aircraft piloted by the guy who is obviously not fit to be a pilot both physically and, most likely, mentally is a first indicator of a pathetic state Ukrainian military is in and that is the first indicator of the actual state of Ukrainian economy and State of Ukraine as a whole. I will quote myself yet again:

I don't think Mr. Doctorow understands this crucial determinant but then again, trying to convey these things to humanities "educated" products of liberal economics is virtually impossible--it is simply beyond their grasp that the nation whose armed forces are in the state of implosion, including from desertion, drugs, alcoholism; are armed with mostly obsolete or altogether ancient weapon systems and themselves know damn well that the only strategic operation they will mount will mean their utter destruction--all this reflects quite well on the state of Ukraine than any, traditionally cooked, "statistics". So, Mr. Doctorow, Russians know the state of Ukrainian economy better than you on several order of magnitude more, especially since the catastrophic dynamics of depopulation of Ukraine was admitted by Ukraine's very own government and Russia is dealing still with masses of refuges from Ukraine, EU does this too. It is the nation whose only representation is (was) this old unmaintained Soviet-built jet fighter and fat pilot who inevitably crashed it, taking with him the life of an American pilot.

The moment  I mentioned Rostislav Ishenko in this post yesterday, he published his latest precisely on Ukraine. As always, succinct and precise. It is in Russian, but I suggest using Google--it is worth reading.
How Civilizations Die.
smoothiex12 at 7:14 AM
Share