As was promised in the Bloodiest Battle post, I did catch it. Here it is: 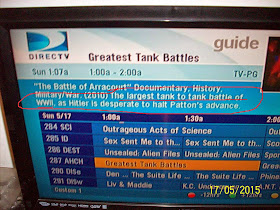 At this stage the only explanation that can be given to this blatant propaganda, and, believe me, in the documentary itself, some US 3rd Army's veterans DO TALK about the Battle of Arracourt as some kind of tank Armageddon, is complex of inferiority, which comes with self-proclaimed exceptionalism. Other than that, I can not possibly explain the stream of blatant lies, exaggerations in a face of irrefutable facts. Propaganda, of which these snippets of the TV programming are but a drop in the bucket of the immense effort in rewriting the history of WW II in US.

The Battle of Arracourt was nothing more than a division force (in reality even weaker), week long, clash of Patton's 3rd Army elements with the elements of 5th Panzer Army, which resulted in about 100 tanks and self-propelled guns lost on both sides. An excellent narrative to all this Lorraine Campaign is given by superb US Army In WW II:

How this all merited a special presentation is beyond me. As overview states the realities of what Patton was facing:


The German defenders were critical of, but grateful for, Patton's decision to a broad front of nine divisions spread out over 60 miles. In particular, they felt that the Americans made a grave error in not concentrating their three armored divisions into one corps for a knockout blow. The 3 panzer divisions in Lorraine were down to 13, 7, and 4 tanks respectively, a fact that Patton was well aware of, thanks to Ultra. On paper, there were 12 German divisions facing Third Army's 9, but in reality, the defenders possessed just 1 battalion for each 4 miles of front. Therefore, Patton's decision to tie his armored divisions to the infantry enabled the Germans to delay the Third Army with a thin screen and pull the bulk of their forces back into the Westwall.

But the real overview is the matter of me finally finishing my big job (it is almost done) and getting down to the realities of the Western Front. Needless to say, that looking at the realities of Kursk Battle makes any discussion about "largest tank to tank battle" at Arracourt an exercise in futility. But here, we have to get to a genius of an actor George C. Scott, his Oscar-winning portrayal of Patton, and to the first page of Ladislas Farago's